MEXICO CITY—While the Trump administration talks of new import tariffs, there is already one in place that would slam manufacturers of pickup trucks in Mexico if the U.S. scuttles the North American Free Trade Agreement.

Under the so-called Chicken Tax first imposed more than a half-century ago, the U.S. levies a 25% duty on all pickup trucks and some work vans produced outside the country. Trucks produced in Mexico by the likes of General Motors Co., Toyota Motor Corp. and Fiat Chrysler Automobiles NV have been exempt from the tariff under the 23-year-old Nafta agreement, which erased tariffs and other trade barriers between the U.S., Mexico and Canada.

The tariff’s name comes from an early-1960s trade dispute that arose after U.S. chicken farmers flooded European markets with inexpensive poultry. Some countries, including then-West Germany, taxed U.S. chickens, and President Lyndon B. Johnson retaliated with a tariff on pickup trucks made by Volkswagen AG and others.

Should the Trump administration gut Nafta, the Chicken Tax would apply to trucks imported from Mexico, economists and trade analysts say. Passenger cars from Mexico would carry a smaller duty of 2.5%, according to rules under the World Trade Organization.

“You’re looking at a potential massive hit to any truck maker if Mexican trucks are considered an import,” said Jeff Schuster, executive vice president of LMC Automotive, an auto-industry forecaster based in Troy, Mich. Bringing back the tax “would mean a massive hike in pricing or margin erosion,” Mr. Schuster said.

Mr. Trump has described Nafta as “the worst trade deal ever” and criticized it for costing U.S. manufacturing jobs. He has repeatedly threatened to apply a tariff of as much as 35% on imports from Mexico, and recently said he intends to “fast-track” a Nafta renegotiation. Auto makers in particular, including GM, Toyota and Ford Motor Co., have incurred his wrath for producing vehicles in Mexico instead of the U.S.

The president cites the U.S.’s trade deficit of more than $60 billion with its southern neighbor as proof that Mexico is “taking advantage” of the U.S. Pickups account for about a third of the imbalance.

Last year through November, the U.S. imported from Mexico $18.5 billion worth of vehicles that would be subject to the Chicken Tax if not for Nafta, according to an analysis of International Trade Commission data by the Cato Institute, a libertarian-leaning think tank based in Washington. That is an increase of 16% from the first 11 months of 2015.

Meanwhile, Republicans in the U.S. House of Representatives are pursuing legislation that while designed to reduce the corporate tax rate from 35% to 20% would stop U.S. companies from deducting the cost of imports from their tax bill. Such a “border adjustment tax” would aim to promote production within the U.S.

“If you’re paying the Chicken Tax tariff, and you also can’t take a tax deduction on your imports, that would be the worst of both worlds,” said Brian Johnson, an auto analyst with Barclays PLC. “The Big Three would definitely get hurt.” 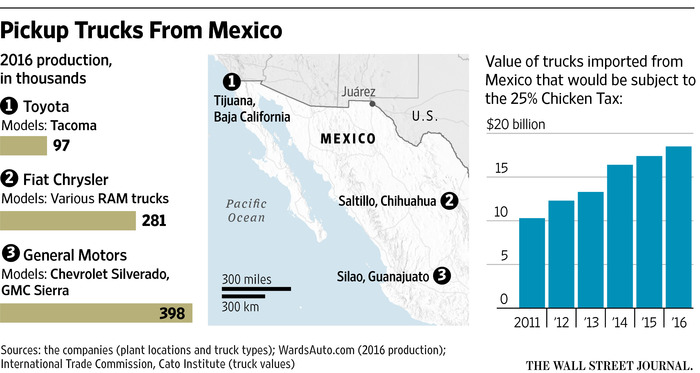 He noted that Ford is less vulnerable because while it makes passenger cars in Mexico, all the pickups it sells in the U.S. are made in the country.

Americans bought 2.7 million pickup trucks last year, of which 654,487, or roughly one in four, were produced in Mexico, LMC estimates. All of the Mexican-made trucks came from just three factories, run by GM, Toyota and Fiat Chrysler.

Fiat Chrysler produces all of its Ram 2500 and 3500 heavy-duty trucks and about 22% of its midsize Ram 1500 trucks in a 213,000 square foot plant in Saltillo, in Northern Mexico. Jody Tinson, a Fiat Chrysler spokesperson, said “we need clarity on the new administration’s plan” before the company can comment on any potential new taxes.

One big question is whether the truck makers would shift capacity back to the U.S. if the Chicken Tax were reimposed or instead continue producing in Mexico but pass along higher prices to consumers.

Scott Vazin, a Toyota spokesman, said that any new tariffs on vehicles would ultimately be passed on to consumers because “no auto maker can absorb” them.

Patrick Morrissey, a GM spokesman, declined to comment on the potential impact of the Chicken Tax, saying “there aren’t enough specifics available yet.”

LMC’s Mr. Schuster estimates that GM, Toyota and Chrysler plants in the U.S. could take over about half of the companies’ current pickup production in Mexico, “but even then we’re talking about somewhere in the range of 300,000 to 350,000 units a year that would either go away or you’re looking at potentially enormous price increases.”

Alan Baum, an independent auto-industry analyst based in Detroit, said such a huge production shift away from Mexico would be incredibly costly and would take years to pull off. A new assembly plant or the addition of production lines to an existing facility typically costs more than $1 billion, he said.

In an earnings call with analysts in late January, Fiat Chrysler Chief Executive Sergio Marchionne said his company is considering how to “follow the president in his direction” by bringing a significant portion of the company’s truck production back to the U.S. as early as 2019.

For Mexican auto-parts companies, application of the Chicken Tax, especially in combination with other border taxes, could trigger factory closures and thousands of job losses.

In Monterrey, an industrial city some 55 miles from Fiat Chrysler’s truck plant in Saltillo, roughly 84,000 people work in the automotive industry, producing everything from exhaust systems to dashboard electronics, according to Manuel Montoya Ortega, the head of a local auto industry group.

Metalsa SA runs a factory on the city’s outskirts that produces 680,000 steel chassis each year, including all the frames for Mexican-made Ram pickups, employing some 3.600 workers. Losing the Fiat Chrysler factory would be a huge blow to the local economy, Mr. Montoya said.

“These are the most formal, most stable jobs in the region, from factory positions to designers and engineers,” he said. “Everyone is very worried.”