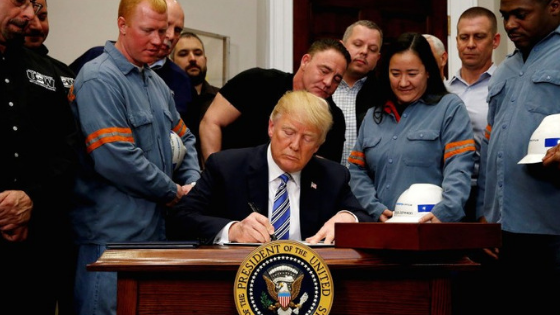 Editors note: New Council of Economic Advisers report says that even after the Trump tariffs, the average US tariff rate is just 2.6%, still one of the lowest in the world.

Tariffs imposed by President Trump last year caused the average U.S. tariff rate to jump by nearly 75 percent, according to the latest “Economic Report of the President” released on Tuesday.

“The tariffs implemented in 2018 raised the U.S. average applied tariff by 1.1 percentage points, from 1.5 percent in January 2018 to 2.6 percent in November 2018,” the annual report from the Council of Economic Advisers states – an increase of 73.3 percent.

Those duties include Section 201 tariffs imposed on solar panels and washing machines, Section 232 tariffs on steel and aluminum and Section 301 tariffs on $250 billion worth of Chinese goods.

The federal government collected $14.4 billion in revenue from the tariffs in 2018. President Trump frequently claims that tariffs are paid by foreign countries.

“Offsetting these benefits are the costs paid by consumers in the form of higher prices and reduced consumption,” the CEA report says. “Foreign exporters also bear some of tariffs’ economic incidence, although the extent varies across products. The foreign incidence is smallest for substitutable products such as commodities.”

Read more of the article at Inside U.S. Trade