Bannon And Bass: "China Is Most Significant Existential Threat The US Has Ever Faced"

Perhaps out of concern that his former boss might be pushing Robert Lighthizer and Steve Mnuchin to cave on enforcement, technology transfers and market access for the sake of securing a deal with Beijing, former White House Chief strategist Steve Bannon appeared alongside hedge fund manager Kyle Bass, Wall Street's most visible China bear, to try and explain why Washington needs to stick to its guns and make sure Beijing is held to account for its decades of trade abuses.

Bass, who just the other day distributed his first investor letter in three years warning about a coming blowup in Hong Kong's balance of payments, argued that the immense pressure for Trump to strike a deal isn't coming from voters, but from Wall Street and corporate America, who have abetted Beijing in its efforts to maintain the status quo on trade - selling out their country in the process.

Drawing attention to something that few political analysts have been willing to discuss since the US-China trade spat erupted early last year, Bass broke down China's lobbying strategy, which we highlighted here. 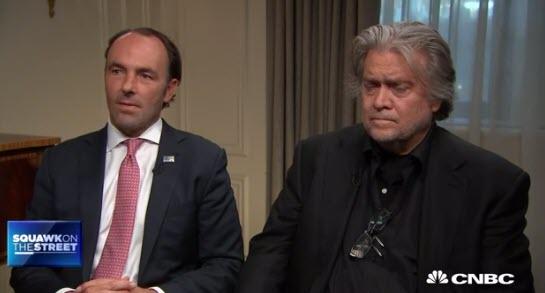 For years, Beijing has sought to curry favor with individual companies and industries by granting them piecemeal concessions, mostly in the form of market access. And since the start of the trade war, Beijing hasn't been shy about calling in favors, which is why most of the American business and financial community just wants Trump to end the trade war, even if it means settling for a deal that achieves none of Washington's objectives on 'structural reform', kicks the can on enforcement to Trump's successor, and touts promises for purchases of billions of dollars of agricultural goods instead of meaningful changes.

"All the pressure on Trump to strike a trade deal is coming from Wall Street and corporate America," Bass argued. "Look who fought CFIUS reform...some of the biggest companies in the US and Wall Street came together to fight it. Steve is right about who's fighting...it's corporate America fighting to get Trump to do a deal...and China plays that card and they play it better than anyone else...they open a market to very specific people to court influence."

At the. beginning of the interview, Bannon warned that Americans are underestimating the threat posed by China, bringing up Huawei, 5G, 'One Belt, One Road' and China 2025'. As he repeatedly warned during the 2016 campaign, China represents "the most significant existential threat we have ever faced."

"Look at what they're doing...they have a geopolitical strategy to unite theEurasian land mass into one single market then to force the United States out of the Western Pacific then out of the Pacific overall. The radical cadre - this is not the Chinese people - this is about a radical cadre that is taking charge of the Communist Party led by President Xi...they've been running an economic war against the industrial democracies for 20 years."

Questioned about what's so different about China's approach to how the US rose to global dominance almost a century ago, Bannon warned about Beijing's system of "predatory capitalism" and "debt traps." Meanwhile, corporate America and Wall Street has repeatedly enabled Beijing.

And by the way, the funding -- the entire operation of the Chinese Communist Party and what they’re running in China is being funded by Wall Street, which Kyle can walk through, being funded by Wall Street. And corporate America – remember, PBS or NPR had this thing the other day about intrusions into stealing Intellectual Property in American companies. They talked to a Treasury official went around to 200 companies. Not one company would -- had been stolen from would press charges because they didn’t want to be blocked out of China. Corporate America today is the lobbying arm of the Chinese Communist Party and Wall Street is the investor relations department. You can see this on President Trump’s -- on President Trump’s trade negotiation, which I say is an armistice on the economic war. When Liu He comes to the United States, where does he go first?

Both Democrats and Republicans have failed to understand, or willingly ignored, this threat. But for the first time, the US has a president who has been willing to take on the Chinese.

"Now we have a whole of government approach to really confront China on an economic war, this has never happened...the permanent political class and their paymasters on Wall Street have owned the political dialogue."

Asked by CNBC's Brian Sullivan if he could really blame corporate America for working with China, citing their fiduciary obligations to shareholder, Bannon insisted that corporations also have a commitment to stakeholders like the American people.

"I've worked at Goldman Sachs, and I've lived in China...corporate America has a responsibility to its shareholders, but they also have an obligation to their stakeholders - to their employees and their country."

So, what's the solution? No more 'Buicks in China,' as Sullivan put it?

"What you do is back President Trump," Bannon said.

Further emphasizing his point that now is not the time for the US to pull punches, Bannon warned that Beijing is keenly aware of the growing wariness in the west of China's mercantilist economic policy. So Beijing has sought to 'rebrand' many of its most controversial policies.

After Bannon finished saying his piece, Sullivan shifted his focus to Bass and his warnings about "the Quiet Panic" brewing in Hong Kong. Though his letter hasn't been widely released, WSJ published a summary.

In his letter, Bass revealed that he planned to take on a long-term bet that Hong Kong's monetary authority will eventually abandon its peg for the Hong Kong dollar, sparking a sharp devaluation that could lead to huge gains for anybody betting against the currency. Since the peg has held for 36 years, out of the money puts on the Hong Kong dollar are extremely cheap. Though he told CNBC that his bearish case on Hong Kong is about more than the currency.

"My point isn't narrowly focused on where the currency's going," he said. "My point is that if you look at Hong Kong, their banks are 900% of their GDP, their leverage is 900% of their GDP. They're out of reserves and they've spent too much of them defending this peg."

"The numbers are impossible to argue. The outcome is what's under debate. If you look at it and develop and objective opinion here on where the imbalances are and it looks like the pressure cooker is about to go off...it might be a year, it might be two years....it might be six months."

Ultimately, Bass believes "you're going to see a revaluation of all the Southeast Asian currencies, starting with China and Hong Kong."

As the interview wrapped up, Sullivan turned back to Biden to ask a few questions on the Washington news du jour.

Asked for his thoughts on Joe Biden's candidacy, Bannon argued that we have already seen 'peak Biden', and that there's 'no way' the former VP would become the nominee. He also warned that Biden has a major vulnerability that hasn't been much-discussed so far: His cozy relationship with Beijing. Bannon brought up a deal struck by Biden's son Hunter with a Chinese bank for $1.4 billion, and suggested this might be one of the reasons the Obama administration "looked the other way" as Beijing built up what Bannon once described as immovable aircraft carriers in the South China Sea.

Biden "has no chance to take on Donald Trump. He doesn't have the stamina, or the smarts." And for the Democratic candidates more generally, "unless you start talking about China, you won't be competitive against Trump." As for the Mueller report, Bannon agreed that there was 'no collusion and no obstruction' and that it's going to be 'six months of terrible vitriol' from the Democrats, but that Trump would power through.

This wasn't the first time Bass and Bannon have appeared together to warn about the dangers posed by China. Find our previous coverage here.

Watch the full interview below: