Beijing Drops Contentious ‘Made in China 2025’ Slogan, but Policy Remains

U.S. has slammed program as a subsidy-stuffer to advance China as global technology leader at U.S. expense

Instead, Mr. Li said the government would promote advanced manufacturing. He ticked off a list of emerging industries to nurture—next-generation information technology, high-end equipment, biomedicine and new-energy automobiles—that were also in “Made in China 2025” and with a similar goal: “Buy China.”

The government would “work faster to make China strong in manufacturing,” Mr. Li told the roughly 3,000 delegates inside the Great Hall of the People. Beijing, he said, would “encourage more domestic and foreign users to choose Chinese goods and services.”

As China and the U.S. near a deal to settle a yearlong trade battle, the remarks are likely to feed the suspicions of some in the Trump administration that Beijing isn’t going to give into demands to change its government-led economic model, leaving the U.S. with a bad deal.

“These are precisely the sorts of structural policies that hardliners in the Trump administration do not trust China to change,” said Cornell University economist Eswar Prasad, who consults with Chinese officials. The statements coming out of China’s National People’s Congress, he said, “seem to validate their concerns.”

Beijing unveiled the “Made in China 2025” plan five years ago to make the nation a leader at the frontiers of manufacturing. Officials in the Trump administration have called the plan a threat to fair competition, saying it encourages state subsidies for domestic companies and forces technology transfer from foreign companies with the aim of driving them out of business.

The trade fight with the U.S. has deepened the downturn in an already slowing Chinese economy. Mr. Li said Tuesday that the government has lowered its economic-growth target to a range of 6% to 6.5% this year, from around 6.5%, and he promised tax breaks for businesses and support for companies pinched by the trade battle to keep people employed.

Under pressure from Washington, Beijing has agreed to replace “Made in China 2025” with a new program promising greater access for foreign companies. In remarks to reporters Tuesday, Minister of Industry and Information Technology Miao Wei said that China’s industrial policy would in future adhere to the concept of “competitive neutrality,” a principle pushed by the Trump administration when it renegotiated the North American Free Trade Agreement. Under that concept, governments are prohibited from favoring state-owned companies over privately owned ones.

“The discriminatory problems we had in the past will be eliminated,” Mr. Miao said.

So far, there are few signs that the new policy will significantly reduce subsidies to preferred companies or sectors. A separate report issued Tuesday by the National Development and Reform Commission, the country’s top economic-planning agency, which is leading the effort to draft the new industrial plan, said the government would help develop “a number of clusters of strategic, emerging industries.”

The Finance Ministry’s budget report for 2019 said the ministry would “give full play to the government funds” to promote high-quality manufacturing and would “guide capital and resources toward key areas of strategic importance.”

“China had industrial policy long before ‘Made in China 2025’ and will continue to have it long after ‘Made in China’ is buried,” said Scott Kennedy, an expert on China’s economy at the Center for Strategic and International Studies, a Washington think tank. “What we have now is old wine in new bottles.”

Across China, local governments have also put in place policies intended to foster new growth drivers, namely technology-related sectors such as big data, e-commerce and artificial intelligence. Eastern Zhejiang province, known for its entrepreneurial zeal, has set a goal to increase manufacturing output utilizing robotics and artificial intelligence by 15% annually over the next two years.

“We’re told not to talk about “Made in China 2025” anymore because the Americans don’t like it,” a local official said. “But of course the government will continue to provide support to important industries.”

“What we have now is old wine in new bottles.”—Scott Kennedy, Center for Strategic and International Studies

Still, within the Chinese government, many officials have cast doubt about the effectiveness of the country’s state-led industrial policies. A prime example they point to is the flood of cheap loans the government has channeled to battery makers for the electric-car industry, leading to severe overproduction.

Getting Beijing to turn away from such a model is an uphill battle, especially when President Xi Jinping is seeking to disarm forces that say China is caving too much to the U.S. demands.

At a press conference late Tuesday, a senior Chinese official dismissed the omission of “Made in China 2025” from the premier’s report. “Space was limited,” said Huang Shouhong, director of the State Council Research Office, who led the drafting of Mr. Li’s 35-page report.

The trade talks between Washington and Beijing have recently progressed to the extent that a formal agreement could be reached at a summit between President Trump and President Xi, probably around March 27, according to people with knowledge of the plans. As part of the deal, Beijing is pledging to purchase more U.S. farm and energy products, to accelerate the opening of financial services and other sectors to American capital and to better protect U.S. intellectual-property rights.

“There are significant differences between the two countries’ systems, culture and development stages,” Mr. Zhong said on the sidelines of the legislative session. “The negotiations are very difficult and very hard.” 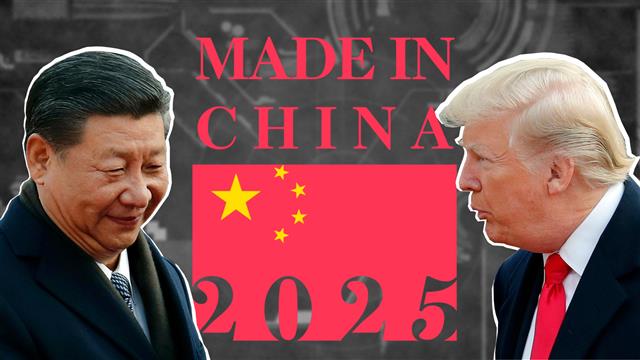 “Made in China 2025” is Beijing’s industrial plan to dominate high-tech industries including robotics, aerospace and computer chips. The Trump administration argues China is using the plan to give its tech companies unfair advantage over foreign rivals. But what is it exactly? (Originally published April 16, 2018)