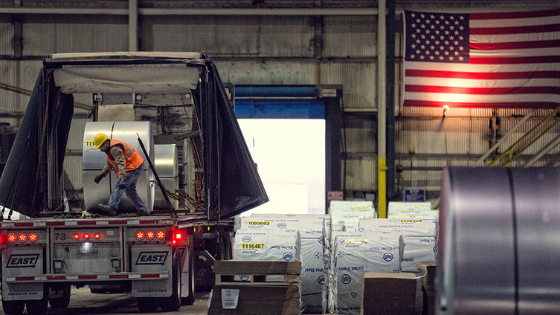 CEO Moves Show How Trump’s Economy Is Supposed To Work

Editor’s note: This article highlights substantial new plant investment which is resulting from the presidents’ tariffs. It is the story we don’t often read as the mainstream press cherry pick bad news to oppose an aggressive trade strategy. CPA’s research work is featured in this article.

In the wake of President Trump’s report of a scintillating performance by the economy and job creation in his State of the Union speech came ratification in the form of some major new moves by U.S. companies.

The actions illustrated how the Trump economy is supposed to work:

• Americans’ confidence in their financial future encourages more investments by automakers in the high-profit vehicle categories that have fueled their decade-long boom – check.

• And even when manufacturers cut jobs, the robustness of the economy overall promises to sop up the laid-off workers with relative smoothness – check.

Beaumont, one of the biggest healthcare providers in metro Detroit, has taken the interesting step of saying it has about 500 job openings that might be specifically suitable for the 4,000 salaried General Motors workers who are losing their jobs in GM CEO Mary Barra’s widely publicized cutbacks, which include not only white-collar reductions but also the closing of five North American plants. Beaumont has about 1,500 job openings, with about one-third of them being non-clinical – meaning, they’re jobs that the ex-GMers might be capable of filling, and in most cases without having to uproot themselves.

So while Trump loudly and personally criticized Barra for her plant-closing decision, GM’s move to batten down the hatches before the next industry downturn may not dent the U.S. economy much, in part because growth, employment and consumer confidence continue to be strong. Unlike earlier GM cutbacks such as in 2009 after its federal-government bailout, the economy should be able to absorb this one relatively easily.

Steel Dynamics is among several American steelmakers that are investing anew in U.S. production under the umbrella of Trump’s 25-percent tariffs on foreign steel. “We’ll be taking a large chunk of market share from imports,” Millett told analysts last month. The company is backing up the talk with construction of a new mill in the Southwest planned by 2021, which would be one of the largest built in the U.S. in decades.

Meanwhile, build-outs by United States Steel, Nucor and several other companies would add 16 million tons of steelmaking capacity, an 18-percent boost over 2017 before tariffs took effect.

Overall, tariffs imposed on subsidized imports from China has led to the hiring of 261,000 people in steel and other American manufacturing, found the Coalition for a Prosperous America, a Washington, D.C.-based not-for-profit organization that said it represents manufacturing, labor and agricultural interests and crosses the political spectrum.

Ford has been facing investor pressure to show quicker progress in its major transitions—out of sedans, and into the world of electric and autonomous mobility—and to boost profit margins under Hackett nearly two years into his tenure.

Hackett just announced a big vote of confidence in the continuation of strong sales of the SUVs and pickup trucks that have kept Ford profitable over the last several years, affirming its commitment to invest $1 billion in its Chicago assembly and stamping complex to make redesigned and new models – and adding 500 jobs, to bring Ford’s total workforce there to about 5,800. The initial promise was made in Ford’s most recent pact with the United Auto Workers, but the go-ahead decision means Hackett still sees a promising market.