China has installed equipment on two of its fortified outposts in the Spratly Islands capable of jamming communications and radar systems, a significant step in its creeping militarization of the South China Sea, U.S. officials say.

The move strengthens China’s ability to assert its extensive territorial claims and hinder U.S. military operations in a contested region that includes some of the world’s busiest shipping routes.

The disclosure comes as the Chinese military is conducting what U.S. officials describe as its largest military exercise to date in the South China Sea, maneuvers that include China’s first aircraft carrier as well as air force and ground units.

The U.S. assessment is supported by a photo taken last month by the commercial satellite company DigitalGlobe and provided to The Wall Street Journal. It shows a suspected jammer system with its antenna extended on Mischief Reef, one of seven Spratly outcrops where China has built fortified artificial islands since 2014, moving sand onto rocks and reefs and paving them over with concrete.

China’s Defense Ministry didn’t respond to a request for comment.

Beijing claims “indisputable” sovereignty over all South China Sea islands and their adjacent waters and demarcates its claims with a U-shaped line stretching from the Chinese coast almost as far south as Malaysia.

China says its island-building is for defensive purposes only, but the activity has stirred fears that it could use the outposts to enforce territorial claims that overlap with those of Brunei, Malaysia, Taiwan and Vietnam, as well as the Philippines, which is a U.S. treaty ally. In the last year or so, China has tried to smooth relations with other claimants while continuing work on the islands.

While Chinese military personnel are at the Spratly outposts and Chinese ships dock there, China has yet to station ground units or fighter planes on the artificial islands, U.S. officials say. Nor have surface-to-air missiles or antiship cruise missiles been deployed in the Spratlys, though spots to install such weapons have been prepared, U.S. officials said.

But China’s ability to quickly shift military assets to the outposts is a serious concern for the Pentagon since it could enable China to control vital trade routes, exclude other claimants from disputed areas and interfere with the U.S. military’s plans to defend Taiwan.

According to U.S. intelligence, the new jamming equipment was deployed within the past 90 days on Fiery Cross Reef and Mischief Reef.

“While China has maintained that the construction of the islands is to ensure safety at sea, navigation assistance, search and rescue, fisheries protection and other nonmilitary functions, electronic-jamming equipment is only for military use,” the U.S. Defense Department official said.

The U.S. regards most of the South China Sea as international waters and has sent ships through the Spratly archipelago to assert its right to freedom of navigation in the area.

China has been steadily escalating its military activities in the area. Beijing has deployed HQ-9 surface-to-air missiles and J-11B jet fighters in the disputed Paracel Islands since 2016. Those islands are about 500 miles north of the Spratlys in the South China Sea. 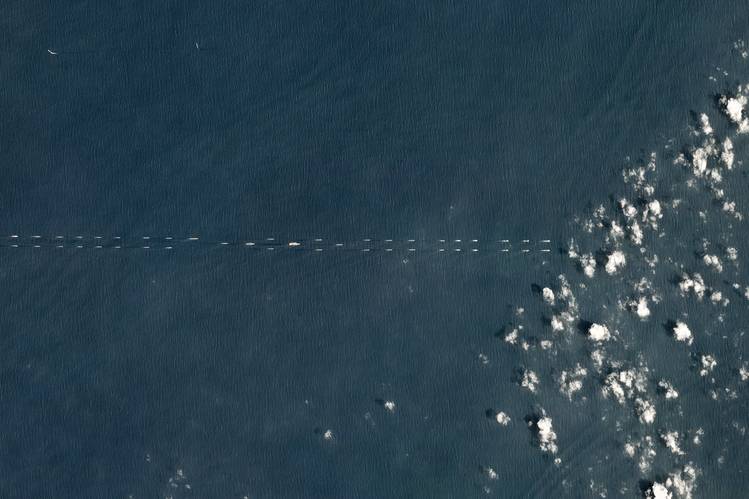 Recent satellite images from Planet Labs Inc. showed about 40 Chinese naval vessels, including submarines and the aircraft carrier Liaoning, sailing in formation in the South China Sea near Hainan in an unusually large show of force.

The drills took place from March 24 to April 5 off the coast of southern Guangdong province, then moved off the east coast of Hainan, where they will continue until April 11, according to notices from China’s maritime safety administration.

“The goal is to inspect and increase the troops’ training level, and enhance their capacity to win a victory,” Chinese Defense Ministry spokesman Ren Guoqiang said this month. “It’s not aimed at any particular country or target.”

Enhancing the Chinese military’s capacity for U.S.-style joint combat operations—involving all the armed services—is one of the main goals of a four-year military-restructuring plan begun by Xi Jinping, China’s president and military chief, in 2016.

Analysts said the exercises appear to be designed to practice joint operations involving China’s South Sea Fleet, based in Guangdong, and the Liaoning carrier group, based in China’s northeast, as well as air, missile and other forces.

Air Force spokesman Shen Jinke acknowledged last month that Su-35s and H-6s recently conducted joint combat patrols over the South China Sea, without specifying the exact timing or location. China revealed in February that it had sent Su-35s, bought from Russia and delivered in late 2016, to the South China Sea for the first time.

U.S. officials said drills involving Chinese marines on the mainland were part of the broader exercise as well.

Timothy R. Heath, a senior analyst at the Rand Corporation, said that while the main purpose of the exercise was to improve the readiness of China’s forces, it was also sending a political message.

“To Chinese domestic audiences, Beijing is signaling strength and readiness to defend the country’s interests, which may bolster nationalist support for the government,” Mr. Heath said. “To the region and the United States, Beijing is signaling that it has been acting with restraint, but that it is willing to meet confrontational policies with its own confrontational policies.”

“Even if all three carriers came to the South China Sea, what about it?” Gen. Jin told state-run China National Radio. U.S. carrier operations in the area gave China a chance to study their operations and their radar and other electronic signals, he said.

“What else can you do apart from a show of strength? Can you attack me? Do you dare to open fire?” he said.