Editors note: While this article portrays overcapacity in China’s automotive manufacturing plants as a problem, it may also be the beginning of driving American companies out of local and global markets with subsidized, state supported competitors.

CHONGQING, China — For Detroit, China once meant opportunity. The country’s growing ranks of drivers bought cars by the millions. Its cheap labor gave American automakers dreams of someday exporting their Chinese-made cars to the United States. The Big Three bet billions of dollars there.

Now China’s place in the world is shifting, and that bet is starting to sour.

Chinese consumers are buying fewer cars as the country’s economy slows. Local competitors have raised their game. Many young people would rather use ride-sharing services similar to Uber than own vehicles themselves.

And if the Trump administration’s trade hawks have their way, China won’t make many cars for Americans. As Washington and Beijing haggle over a deal to end their trade war, the hawks are defending tariffs, imposed by President Trump last year, that would make it expensive to sell Chinese-made cars — including those with American brands — in the United States.

China’s slowdown presents the most immediate problem. Some of Detroit’s Chinese factories have slowed to a crawl. In the inland metropolis of Chongqing, where Ford builds cars like the compact Focus, three big assembly plants have been running at less than one-fifth of capacity. Ford’s joint venture in Chongqing has quietly begun dismissing thousands of its 20,000 workers.

Seven Zhou, a 32-year-old worker who assembled transmissions, lost his job last month. His paychecks had already shrunk by two-thirds because he was working fewer hours. He quit smoking to pay for food and rent, and the family is struggling to pay for the after-school English and math lessons his son needs for a chance at college.

“I do not have much education,” Mr. Zhou said. “I had hoped my child would not be like me, the bottom level of labor.”

As China transforms, many global businesses are struggling to adapt. China’s economy has matured and can no longer match the sky-high growth rates of its go-go years. The Chinese government is trying to cope with all the debt accumulated to pay for that growth. Initiatives that could juice the economy have slowed.

The rest of the world has begun to fundamentally rethink its dependence on China to make much of what the world consumes. Some within the Trump administration see China as an existential threat to core American industries like autos, much as it has come to dominate production of solar panels, steel and aluminum.

There have long been doubts among automakers and consumers about whether cars made in China could measure up to those produced in America. But with the gap in quality narrowing, companies in China and the United States have begun to explore the possibility.

General Motors, which began exporting the Buick Envision from China to the United States in 2016, has been pleading since last summer without success for the Trump administration to exempt it from a 25 percent tariff imposed on Chinese-made cars. Ford announced in the summer of 2017 that it would move Focus production to China from Michigan, only to cancel those plans as the political landscape changed in the United States.

Exports from China to the United States of Detroit-brand cars are “a no-fly zone,” said Michael Dunne, the chief executive of ZoZo Go, an automotive consulting firm in San Diego. “It’s just too politically sensitive.”

Detroit’s fortunes in China could still improve. A final trade deal could leave the door open to Chinese exports. The Chinese government could take steps to rev up domestic growth or empower its consumers to buy cars.

But for now, Detroit’s Big Three are struggling in China — particularly Ford.

Business from Detroit has helped China become both the world’s largest maker and its largest buyer of cars. Much of the global auto parts industry has moved there as well, making it especially convenient to manufacture cars in China.

Drawn by the country’s rapid development and consumer revolution, G.M. invested about $10 billion. It now makes and sells more cars through its Chinese joint ventures than it does in the United States. Ford, which came later, invested as much as $5 billion. 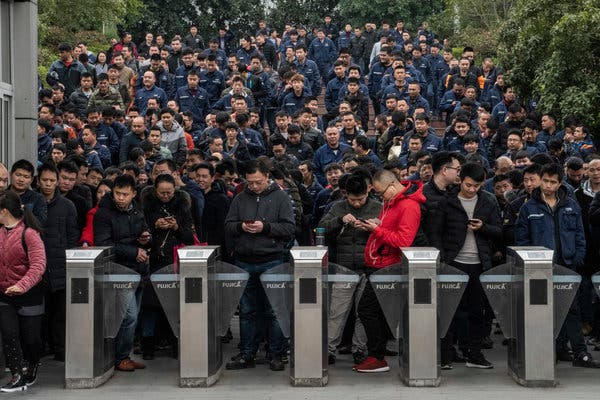 Workers leaving the Changan Ford factory in Chongqing at the end of a shift.Gilles Sabrié for The New York Times

China’s car-building capacity is now roughly equal to those of North America and Europe combined. More car factories are being built to meet regulators’ demands for more electric cars.

But a slowing economy and an end to tax breaks for car buyers have brought the industry back to earth. In January, car sales in China fell 18 percent from a year earlier. The average car factory in China, already operating at a little more than half capacity, has slowed even more amid the sales slump, according to LMC Automotive, a consulting firm.

The ride-hailing business has dealt automakers an unexpected blow. The global auto industry has worried for years that companies like Uber and Lyft could eat into demand, particularly among young customers. That appears to have happened in China, experts say, where dense urban cities have enhanced the appeal of Didi Chuxing, the Chinese ride-hailing giant. Didi now carries twice as many riders in China each year as Uber carries in the rest of the world combined.

“None of the multinational automakers foresaw how disruptive that would be to demand,” said Bill Russo, a former chief executive of Chrysler’s operations in China.

Young people in China are also more open to Chinese brands, thanks in part to their improved quality.

“They’re a lot more favorably disposed towards Chinese brands, and they have a pride in the Chinese brands,” said Nigel Harris, the president of Ford’s main joint venture in China, Changan Ford.

This winter has been difficult for American brands in China. Sales of G.M.’s Chevrolet and Buick models have faltered (though Cadillacs continue to sell well), and Chrysler’s Jeeps face stiff competition from cheaper sport utility vehicles made by Chinese companies. After a dismal autumn, Ford sold 70 percent fewer cars in China in January than it did in the same month a year earlier.

The automakers are tweaking their lineups to improve sales. G.M. and Ford are ramping up production of their respective Cadillac and Lincoln brands to tap the luxury market. G.M. has expanded its bargain Chinese brands, Baojun and Wuling. In a potentially risky move for its brand, Ford has put its blue oval logo on an inexpensive S.U.V., the Territory, that is mostly designed and built by a Chinese automaker, Jiangling Motors.

It is too early to tell how well Ford’s move will go. But at a Ford dealership in Chongqing, the $16,000 Territory was selling briskly, while a number of Focus cars, priced at $22,000, have sat unsold since 2017.

“As soon as one arrives,” Li Pengfei, a salesman, said of the Territory, “someone picks it up.”

Nowhere are the problems of Detroit automakers more apparent than in Chongqing, an often foggy city built on steep slopes overlooking the confluence of two broad, muddy rivers, the Yangtze and the Jialing.

When a local hiring hall held an automotive-themed day last week, it was mobbed with former Ford employees who had accepted severance payments and were looking for their next jobs. The company has changed from running factories on up to three shifts, almost around the clock, to just a single shift.

Mr. Harris declined to discuss layoffs in detail, saying, “Organizational fitness is a critical part of China cost, so we are working night and day to make sure that we are fit.”

In Chongqing, some workers do not see the industry ever recovering.

Du Wen, a 28-year-old in a green hoodie and jeans who had assembled car doors for Ford’s joint venture partner, Changan, for the past four years, said that he was going to leave the auto industry entirely. So he was applying to work at a factory making instant soup, even though that would mean a sharp pay cut.

“Everyone needs to eat,” he said, “even when the economy slows down.”