China bears the brunt of U.S. anger over unfair trade, but Germany’s foreign surpluses are now far larger and may be more consequential for America’s economy and the rest of the world.

Nine of Germany’s 10 top export categories, such as machinery and electronic equipment, are the same as the U.S.’s top-10 exports, says Caroline Freund at the Peterson Institute for International Economics.

The weak euro—which has lost around a quarter of its value against the dollar over the last three years—gives German companies an extra edge in international markets.

With China, the export overlap is smaller, Ms. Freund notes. And China’s currency isn’t considered undervalued these days. Beijing has even been making efforts to prop it up. 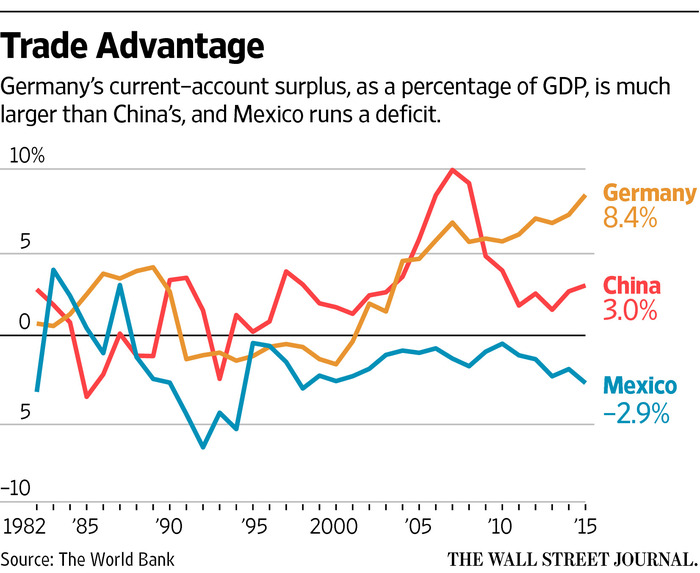 Germany’s surpluses have drawn fire from the new U.S. administration, and could figure large when Group of 20 finance ministers gather in Baden-Baden on March 17. But the country escaped censure in President Donald Trump’s new trade agenda, published March 1, while China, Canada, Mexico and South Korea came under heavy fire. Germany has a larger bilateral trade surplus with the U.S. than all those countries except China.

The mammoth German surplus reflects the nation’s propensity to save rather than consume, a mirror image of large U.S. trade deficits and low saving rates. Put another way, Germany’s current-account surplus means it is accumulating foreign assets, while the U.S. deficit shows it is borrowing heavily from abroad.

Many Germans think it isn’t unreasonable for their aging society to want to save: Germany’s household savings rate is about 10% of gross domestic product, compared with around 3% for the U.S., according to the Organization for Economic Cooperation and Development.

Germany posted a world-record current-account surplus last year, at $297 billion, versus $245 billion for China, according to German economic institute Ifo. China’s surplus has shrunk to around 3% of its economic output from 10% in 2007, while Germany’s has risen steadily since 2000 to around 8.5% of gross domestic product, according to the World Bank.

Trade data understate Germany’s surpluses relative to China’s because Chinese products use input from other countries, particularly in Asia. As little as 2% of the value of an iPhone, for instance, is created in China, according to Dorothee Rouzet, an economist with the Organization for Economic Cooperation and Development in Paris.

Recalculated on a value-added basis, the U.S. bilateral trade deficit with China shrinks by a third, according to a 2013 report by the Dallas Federal Reserve. But the U.S. deficit with Germany expands by one-third in value-added terms because other countries’ exports frequently incorporate German-made products.

To rebalance global consumption and investment, Germany would need to spend and invest more and the U.S. save more.

One problem for U.S. officials is that Germany, unlike China, doesn’t commit particularly egregious trade sins, such as subsidizing export industries or imposing trade barriers. While German officials admit that the euro is too weak for Germany, they have laid the blame squarely with the European Central Bank, whose easy-money policies have been sharply criticized by German officials. For most of the eurozone’s 18 other members, the common currency is too strong.

Berlin argues it has already done a lot to boost domestic demand—and therefore imports—through measures such as enacting the country’s first minimum-wage legislation.

One solution—which had been pushed by the Obama administration—is a massive increase in German state spending to bolster national consumption, an idea also backed by the European Commission, the European Union’s executive arm. The commission last month warned that German economic policies were creating “very significant economic and political distortions for the entire eurozone.”

German public investment, at 2.2% of economic output, is low by international standards. A recent study by the Bertelsmann Foundation suggested that increasing that investment to 3.3% of gross domestic product—the OECD average—would boost Germany’s growth rate to 1.6% from 1.4% over the next decade.

Another option—lowering taxes to boost consumption—hasn’t gained traction in Germany either. Finance Minister Wolfgang Schäuble isn’t keen on large tax cuts because he wants to reduce the national debt, and those tax cuts that are even being considered are income-tax changes that would primarily affect richer workers, with little impact on consumption.

A regulatory rollback is another potential avenue to address trade imbalances. German rules that shield professions and trades, such as bakers and electricians, are seen by some observers as protectionist.

Restrictive regulations also limit investment in Germany and therefore imports, said Marcel Fratzscher, who heads a government n expert committee for the German government on investment. He is calling on the government to slash excessive regulations to unleash €90 billion a year of extra private investment, including in the nation’s cosseted services sector. EU officials have criticized Germany’s role in blocking the deregulation of the EU services market, which accounts for more than 70% of the region’s output.

Changing those rules could boost investment and consumption and reduce the nation’s foreign surpluses, said Sony Kapoor, managing director of Re-Define, a think tank. But to date, advice like this has done little to stop the inexorable rise of the world’s most consequential trade imbalance.