July 23, 2019
Editors note: This is an excellent result that CPA has been working on for some time.

The effort threatens to further fray trade talks with China, which wants to become a global player in transport and is already fuming over the U.S. decision to blacklist telecommunications giant Huawei Technologies Co.

Advocates say the ban is needed to protect an American industry from subsidized Chinese competition. They also claim cameras, location trackers and other gear in Chinese buses and trains could provide surveillance and strategic information to China’s authoritarian government.

“It’s in the national interest to make sure we have viable rail and bus industries and to protect us from spying and sabotage of our public transportation system,” said Rep. Harley Rouda (D., Calif.).

The U.S. House of Representatives passed its version of an annual defense-policy bill July 12 with language blocking transit agencies from using federal money to buy railcars made by Chinese state-owned, -controlled or -subsidized companies. 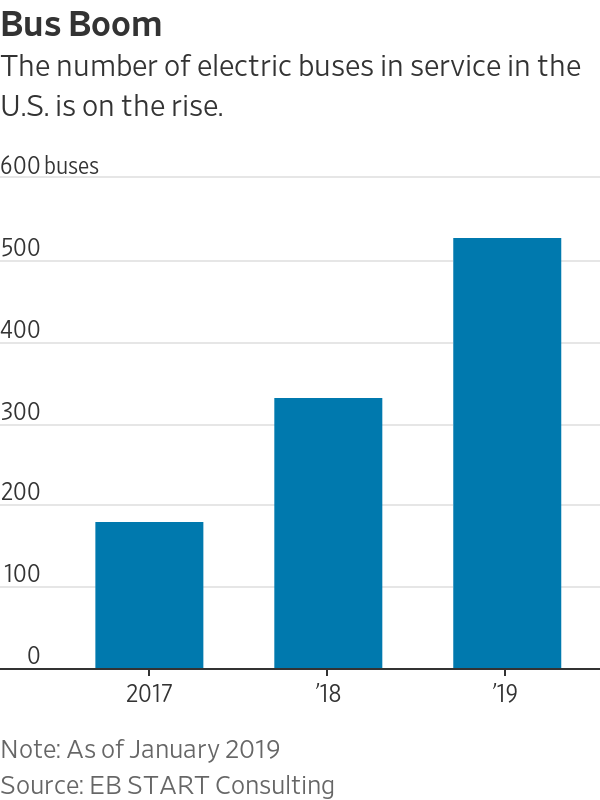 That targets the U.S. subsidiaries of China’s state-owned CRRC Corp., which have been making significant inroads into the U.S. market for railcars, estimated at $18 billion annually.

Similar language in the Senate version of the bill, which passed in June, also would apply to buses. That provision takes aim at BYD Co. , a Chinese company that sells electric buses for the U.S. market through its subsidiary BYD Motors LLC.

Lawmakers will soon start talks behind closed doors to reconcile the two versions of the bill, with Republican and Democratic proponents of the ban optimistic the bus and rail measures will survive. Their intent is to shut China out of the U.S. market, since about a third of capital expenditures by local transit agencies come from the federal government.

“It’s the clash between globalization and local interests that we’ve always had, only now it’s moved up the value chain,” said Scott Kennedy, senior adviser at the Center for Strategic and International Studies, a Washington-based think tank.

China’s President Xi Jinping is pushing big companies to turn themselves into global players, and Chinese companies are seeking to build transportation systems world-wide, including in the U.S.

An overview of the manufacturing line at the plant in Lancaster, Calif., where BYD employs more than 800 people.

CRRC’s U.S. subsidiaries scooped up a string of U.S. contracts between 2014 and 2016 to supply railcars in Boston, Chicago, Los Angeles and Philadelphia by offering bargains. CRRC’s Chicago-based division submitted a bid in May for a contract to supply railcars for the subway in Washington, D.C.

The Beijing-based company won a deal to supply Chicago with 846 railcars with a $1.3 billion bid that was roughly 15% lower than that of Canadian bidderBombardier Inc.

CRRC has set up plants in Chicago and Springfield, Mass., to fulfill its U.S. orders.

“This is a dire situation. If this language becomes law, it means job loss for Americans, clearly,” said Lydia Rivera, a spokeswoman for CRRC’s Massachusetts-based division. Ms. Rivera said the company was sometimes the only bidder for important public contracts.

What precautions should the U.S. consider when dealing with Chinese transportation companies? Join the conversation below.

So far, CRRC manufactures only passenger railcars in the U.S., a field that has no U.S. competitors. But the Chinese company also makes freight cars, and its U.S. rivals fear CRRC’s potential to overrun the sector. CRRC says it has no plan to make freight cars in the U.S.

“We’ve seen them move into other markets before and take over,” said Erik Olson, a lobbyist who represents the Rail Security Alliance, a group of American rail-freight-car companies.

Mr. Olson said transportation is also a strategic business that should be blocked to entities backed by foreign governments. “A foreign government would like to know when we’re moving helicopters or tanks or oil or grain,” he said.

Lawmakers who have BYD or CRRC plants in their districts were able to fend off previous attempts to block their access to federal funds, but opposition has grown recently against the backdrop of U.S.-China trade tensions, Mr. Olson said.

BYD builds electric buses, a relatively small segment that is expected to expand rapidly in coming years as transit systems move to cut carbon emissions. The U.S. electric-bus market is projected to jump from $745 million in 2018 to about $1.95 billion in 2024, according to Prescient & Strategic Intelligence Pvt. Ltd., a market-research and consulting firm.

Based in Shenzhen, BYD has delivered more than 340 electric buses to 14 U.S. states from its plant in Lancaster, Calif., since 2014. The utility unit of Warren Buffett’s Berkshire Hathaway Inc. owned 8.25% of BYD’s Hong Kong-listed shares in the first quarter of 2019.

“The proposed provision, which is being championed by market competitors, would result in higher costs and fewer options for state and local transit authorities,” said Berkshire Hathaway Energy spokeswoman Jessi Strawn.

As part of President Trump’s efforts to rebalance trade relationships, he has imposed tariffs on almost every country around the world. WSJ’s Josh Zumbrun explains where we stand with our largest trading partners. Photo composite: Laura Kammerman

Though not a state company, BYD has pocketed billions of dollars in Chinese electric-vehicle subsidies, helping it to develop into a global player. It has two rivals in the U.S.: Proterra Inc., based in Burlingame, Calif., and New Flyer of America Inc., a Canadian bus maker that operates several U.S. plants.

BYD spokesman Frank Girardot calls the proposed ban unfounded. “There’s no spyware in BYD buses,” he said. “There’s nobody in the Chinese government that tells us what to do.”

Ms. Rivera, the CRRC spokeswoman, also dismissed the national-security arguments being made against the Chinese companies. “We just feel that it’s sensationalized,” she said. “We do not pose a threat to security or the well-being of the traveling public.”

R. Rex Parris, the mayor of Lancaster, credits BYD—which employs more than 800 people in the city—with helping to revitalize the Mojave Desert city of about 180,000 people. “The greatest thing that ever happened to Lancaster was BYD,” Mr. Parris said.

A BYD welder. Legislators from areas with Chinese factories have said a ban on federally funded purchases of Chinese buses and railcars would be ill-considered.

The mayor reached out recently to members of Congress who represent the Lancaster area, Rep. Katie Hill (D., Calif.) and House Minority Leader Kevin McCarthy (R., Calif). “I’ve got calls into both of them,” he said. “I’ve texted both of them.”

Ms. Hill declined to comment. Mr. McCarthy’s office said he wasn’t involved in the issue, although Mr. Rouda said the top House Republican pushed to have BYD exempted from the ban.

Sen. John Cornyn (R., Texas), who is pushing in Congress to bar BYD and CRRC from getting federal funds, said the loss of American jobs in towns such as Lancaster would be unfortunate, but lawmakers must act to counter the economic and national-security threats posed by China.

Mr. Cornyn’s state is home to one of the top domestic freight-car manufacturers, Dallas-based Trinity Industries Inc., a member of the Rail Security Alliance.