The Food & Drug Administration issues dozens of warning letters each year to foreign drug makers. Many of them have received these warnings multiple times, yet are still allowed to export medication to the US unless given an import alert notice.

The Food and Drug Administration (FDA) sent out 23 warning letters in 2020 as of December 1 to global manufacturers of medications used in American hospitals and clinics nationwide. That’s just from one office, the Office of Manufacturing Quality. Of the total, 12 were from Mexico, four were Indian pharma companies and four were Chinese. The remainder were from Canada, Germany and South Korea, each with one warning letter.

To the layman, a warning letter is like a health inspector saying your metallic table doesn’t have the right amount of aluminum in it. Or, for pharmaceutical manufacturers, a filter wasn’t changed often enough. That would be the best instance of a warning letter. Other times, they are very serious and warned of potential for, or actually contaminated medicine. Yet, each time a foreign firm gets slapped with a warning letter, they are still permitted to sell those medications to the US.

Emcure Pharmaceuticals of India is a recipient of the FDA’s letters.  They’ve gotten them every other year for the past five years. Emcure’s first warning letter came in February 2015. Then they got another one in August 2017 and then again in February 2019. It is unclear if this latest issue was resolved – a question of packaging and making sure products were sufficiently sterilized.  The warning in 2019 for their facility was due to a microbial growth found in their products on account of what the FDA later blamed on faulty manufacturing.

From the above letter:

“According to your sterility failure investigations, the most probable root cause for both events was laboratory error. Your firm’s investigations substantially addressed the potential for microbial contamination during sterility testing, but deemphasized potential manufacturing causes.”

Emcure still ships product via UPS into the US and is distributed by a company called Heritage Pharmaceuticals. One product Emcure makes is called prochlorperazine -- an anti-nausea medication used for children undergoing chemotherapy. Emcure accounts for over 50% of the market in the US.  The warning letter has not taken them out of play.

In late May 2019, Heritage Pharmaceuticals took action and issued a voluntary recall of some sublots of prochlorperazine and an injectable infection fighter drug called amikacin sulfate after microbial growth was found in unreleased supplies of both products they had received from India. Patients taking those medications could have gotten systemic infections that would require further hospitalization, or death in a worse-case scenario.

FDA conducts inspections of all facilities selling pharmaceutical products to the US. The rules applied to foreign operations is different than it is domestically. Local drug makers know that companies in India and China, for instance, are given advance notice of visits. Sometimes that buys them enough time to falsify data.

US firms that make similar products often feel that the warning letters don’t go far enough. At the very least, multiple offenders from outside the US should face immediate restrictions until they remedy the situation with the FDA.

Failure to correct violations highlighted in a warning letter can sometimes result in FDA regulatory action, including seizure or injunction, without further notice.

There are six main offices inside the FDA that issue warning letters. The busiest office is the one looking at unapproved drugs and false labeling. Some 126 warning letters were sent to companies so far this year as of the first week of December. Most of them were sent to US firms trying to cash in on the pandemic, including a product issued by Alex Jones, the conspiracy loving founder of Info Wars out of Texas.

The most important warning letters are the ones coming out of the Office of Manufacturing Quality. For warning letters to have any real bite, they have to include what the FDA calls “import alerts”.

Import alerts inform the FDA's field staff and drug importers and distributors that the agency has enough evidence to allow for a Detention Without Physical Examination. This allows the FDA to seize a product at a port of entry.

China’s Yibin Liaho has two of them. They were sent warning letters in February and were issued two Import Alerts in January, meaning they did not fix the problems. One product was porcine heparin, an animal-based input used in various drugs that has since replaced bovine heparin in the US. The FDA has approved the use of bovine heparin, but China pork-based heparin still dominates. 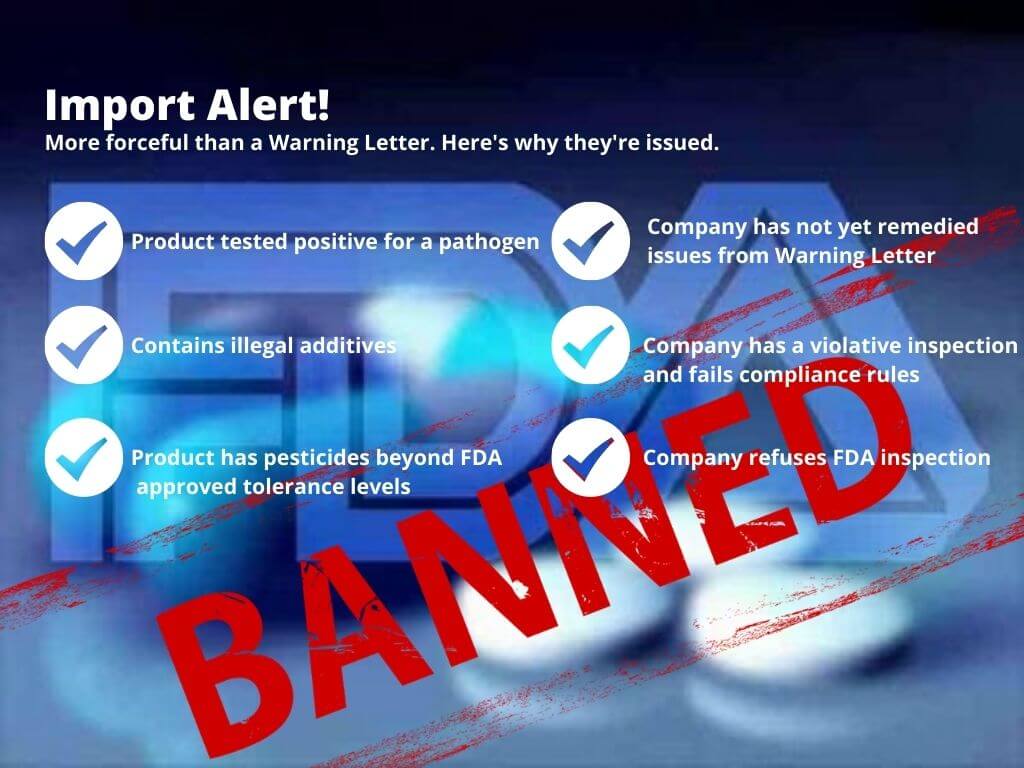 Chinese companies selling human growth hormone, a drug often taken by body builders to gain muscle mass, have also been on the receiving end of Import Alerts since 2016.

On December 2, the FDA updated a massive list of companies on their Import Alert sheet that have refused inspections and were trying to sell food or human and animal medications here. Some of the companies on the list have been there since 2014, suggesting the FDA is clearly on the lookout.

Of the dozens on the so-called Import Alert “Red List”, 65 of them were from China. No other country had as many firms that refused FDA inspections. None of these companies are allowed to sell to the US.

But other entities that have not been red listed, or have yet to receive an import alert notice, are still allowed to be part of the US medical supply chain. Domestic manufacturers would have a more level playing field if the FDA was tougher with those warning notices, and we think there is room for improvement there with repeat offenders.

Shilpa Medicare of India got its warning letter on October 27.

The company makes both tablets and injectable drugs for cancer patients. Given that they are providing cancer medications, patients receiving them are likely to be more susceptible to harmful side effects of a medication that has raised eyebrows by FDA inspectors.

Sometimes the FDA will exempt certain pharmaceuticals and allow for exports without any restrictions that may have come from a failed inspection. The argument is that the drug cannot be found in the US, or is in short supply from other suppliers.

In 2015, China drug maker Hisun got a warning letter and then an import ban on 29 products in 2016, but the FDA exempted around 15 of them due to shortages. The drugs were used for chemotherapies and general antibiotics.

This is sort of like telling doctors, and patients, that although we think the facility that makes this medicine has run afoul of our protocols, and that some of their drugs are banned, you can take these here made by the same company.

Earlier this year Emcure and its local partner Avet Pharmaceuticals in New Jersey had to issue a recall for a commonly used antibiotic called Tetracycline. The recall was due to an improper lab dissolution which resulted in less tetracycline available in the body to fight infection.

The fact that the medication was not potent enough means it could lead to treatment failures especially for patients with compromised immune systems and the elderly, who may be taking tetracycline to treat a serious infection such as pneumonia. Without enough tetracycline in the body to fight the infection, a rapid progression of the infection is plausible.

But the FDA is still allowing Emcure to import despite its many notices.

If companies are allowed to continue selling product under a warning letter with no consequences there is no incentive for a non-US company to be compliant with an FDA they rarely see anyway.

American pharmaceutical firms know that they are up against the budgets of private and public hospitals who are as focused on patient care as they are on providing them with the cheapest drug they can buy. Many of these drugs are coming from abroad, including from places the FDA issues an abundance of warning letters.

US firms that make similar product and are not the subject of warning letters should, at the minimum, be the ones selling to state owned medical facilities. This is especially true for drugs deemed essential by the FDA. And, just as importantly, US firms should be given a preference over perennial warning letter recipients if a drug is made here, even if it not considered essential.