Google Cuts Off Huawei Smartphones From Some Android Services

Chinese tech giant begins to feel impact of U.S. curbs on its access to American technology; other companies halt shipments

Huawei Technologies Co. has begun to feel the effects of U.S. moves to curb its access to U.S. technology, as Google cut access to some of its Android services on Huawei smartphones and a German chip supplier said it was cutting deliveries to the Chinese giant.

Alphabet Inc.’s GOOG +0.32% Google will restrict access to certain Android features to comply with a U.S. requirement that suppliers seek licenses to keep selling to Huawei, according to people familiar with the matter, a sign that the measures may bite into Huawei’s booming consumer-device business.

Huawei, which recently surpassed Apple Inc. as the world’s No. 2 supplier of smartphones—it now trails only Samsung Electronics Co. —relies on Google’s Android operating system to run its devices.

From now, Huawei will be able to use only the public version of Android and won’t have access to proprietary apps and services from Google, according to a person familiar with the matter. Though existing phones are expected to keep functioning largely as usual for now, users could lose some app functions, including some artificial-intelligence and photography features, the person said.

In a separate move, German chip maker Infineon Technologies AG said it was terminating the delivery to Huawei of some components originating in the U.S., in a sign that even non-U.S. suppliers to Huawei are being swept up in the U.S. trade restrictions. Infineon didn’t specify which components were affected by the action but said the “great majority” of products it sells to Huawei aren’t subject to trade restrictions.

Separately, Qualcomm Inc., San Diego, has suspended shipments to Huawei of its chips, and some employees have been told not to communicate with the Huawei side, according to a separate person familiar with the matter. Qualcomm chipsets are used in certain Huawei smartphone models. Huawei also designs a large number of its own chips for higher-end phones.

Lumentum Holdings Inc., which makes optical components for smartphones, said it was stopping shipments to Huawei. In fiscal 2018, the company generated about 11% of its revenue from sales to Huawei.

Xilinx Inc. said it also has begun complying with the Trump administration’s order. The ban on shipments to Huawei could shave about $300 million off the chip maker’s annual revenue for the calendar year, Christopher Rolland, an analyst at Susquehanna International Group, wrote in a research note. Xilinx is expected to record $3.43 billion of revenue this year, according to analysts surveyed by FactSet.

Last week the U.S. Commerce Department said it was adding Huawei to its “entity list” on national-security grounds, requiring companies that export U.S. technology to the Chinese company to apply for a license. The department has indicated applications are likely to be denied, which would cut Huawei off from a range of crucial American suppliers. 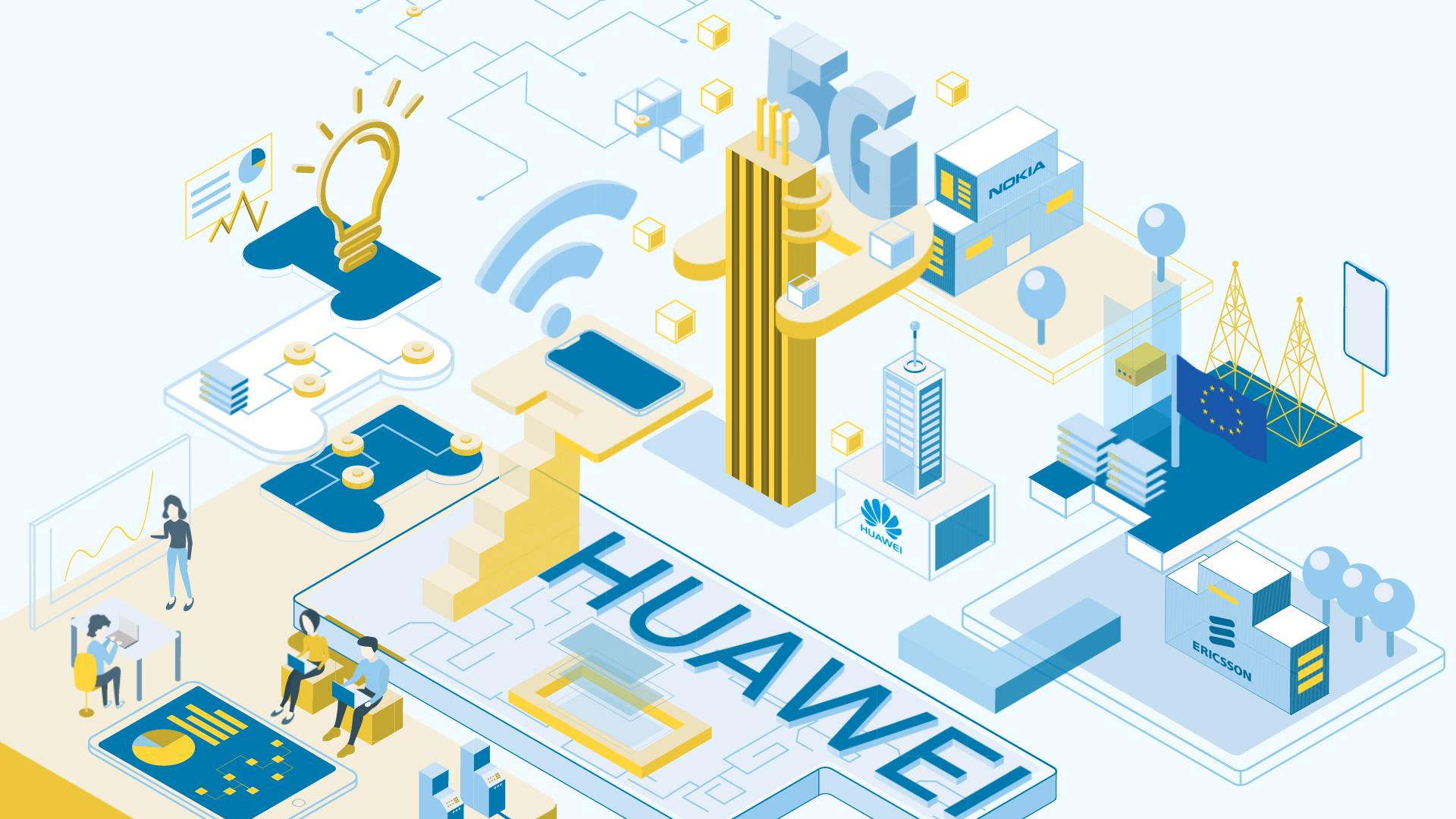 Why It's Almost Impossible to Extract Huawei From Telecom Networks

Allies are under U.S. pressure to shun Huawei. But the company's prevalence in existing telecom networks and dominance in 5G technology make that nearly impossible. Illustration: Crystal Tai

Huawei, the world’s biggest maker of telecommunications gear draws upon suppliers from around the world, but it relies on American companies to supply certain components that go into its smartphones, cellular base stations and other products.

Huawei’s founder and CEO, Ren Zhengfei, told reporters Saturday that the impact on smartphone production would be limited even if Huawei cannot import chips, according to a spokeswoman who confirmed his remarks. Mr. Ren also said the company would stick to an earlier forecast that its annual revenue growth would be under 20%.

A Huawei spokesman said the company would continue providing security updates and after-sales services to existing Huawei smartphone and tablets, “covering those that have been sold and that are still in stock globally.”

“As one of Android’s key global partners, we have worked closely with their open-source platform to develop an ecosystem that has benefited both users and the industry,” the spokesman said.

Melissa Chau, an analyst at IDC, said: “Google apps are incredibly important to a company like Huawei, which is deeply reliant on smartphone shipments outside of China, and representing half of its global shipment figure.” She said it was of “critical importance to have this resolved as soon as possible.”

A Google spokesman said the company was “complying with the order and reviewing the implications.” The spokesman added that many Android functions would continue running as normal, including access to the Google Play app-store service and security protections from Google Play Protect. Reuters first reported the halt by Google.

What do you think about the Trump administration’s move to cut Huawei off from U.S. technology?

Google’s standard suite of apps, like Google Maps and Gmail, would continue to function normally, according to a person familiar with the matter. However, Huawei phones might lose other Google services as part of U.S. government action, this person said. Proprietary apps and services such as some artificial-intelligence capabilities that connect to Google infrastructure might cease to function, according to this person.

Huawei’s global smartphone shipments rose 50% in the first quarter, bucking an industrywide decline of 6.7%, according to research firm International Data Corp. The consumer-business group last year became the biggest source of revenue for the Shenzhen-based technology giant, outpacing revenue from its carrier customers for the first time. Last year, consumer sales including smartphones, laptops and other gadgets accounted for 48% of Huawei’s $107 billion in revenue.

Huawei’s smartphone growth has been fueled largely by sales in Europe and China. Its devices aren’t sold by major wireless carriers in the U.S.

Qualcomm didn’t immediately respond to a request for comment.

Huawei has been stockpiling inventory and has developed its own operating system to protect against a supply disruption. However, it isn’t clear when or if Huawei can easily switch operating systems on existing smartphones.

Huawei’s loss of some Android services could play out in a way similar to the impact on its Chinese rival ZTE Corp. when it was cut off from American technology for three months last year. While ZTE phone users were able to continue using their phones as usual, over time some phones lost functionality as they became unable to receive certain software updates.

In the weekend interview, Mr. Ren said the company wasn’t going down the same path as ZTE, calling the two “different companies.”