A prominent U.S. think tank that received hundreds of thousands of dollars from Huawei has repeatedly given senior Chinese officials a megaphone to rail against the Trump administration and promote pro-China talking points.

The Peterson Institute for International Economics hosted Chinese World Trade Organization ambassador Zhang Xiangchen, who used the high-profile venue to denounce protectionists as "headless chickens" in a thinly veiled criticism of trade skeptics in the United States. PIIE promoted the July 15 event on social media by taking direct aim at Sen. Josh Hawley (R., Mo.)—a prominent China hawk who spearheaded the push to withdraw the United States from the WTO. 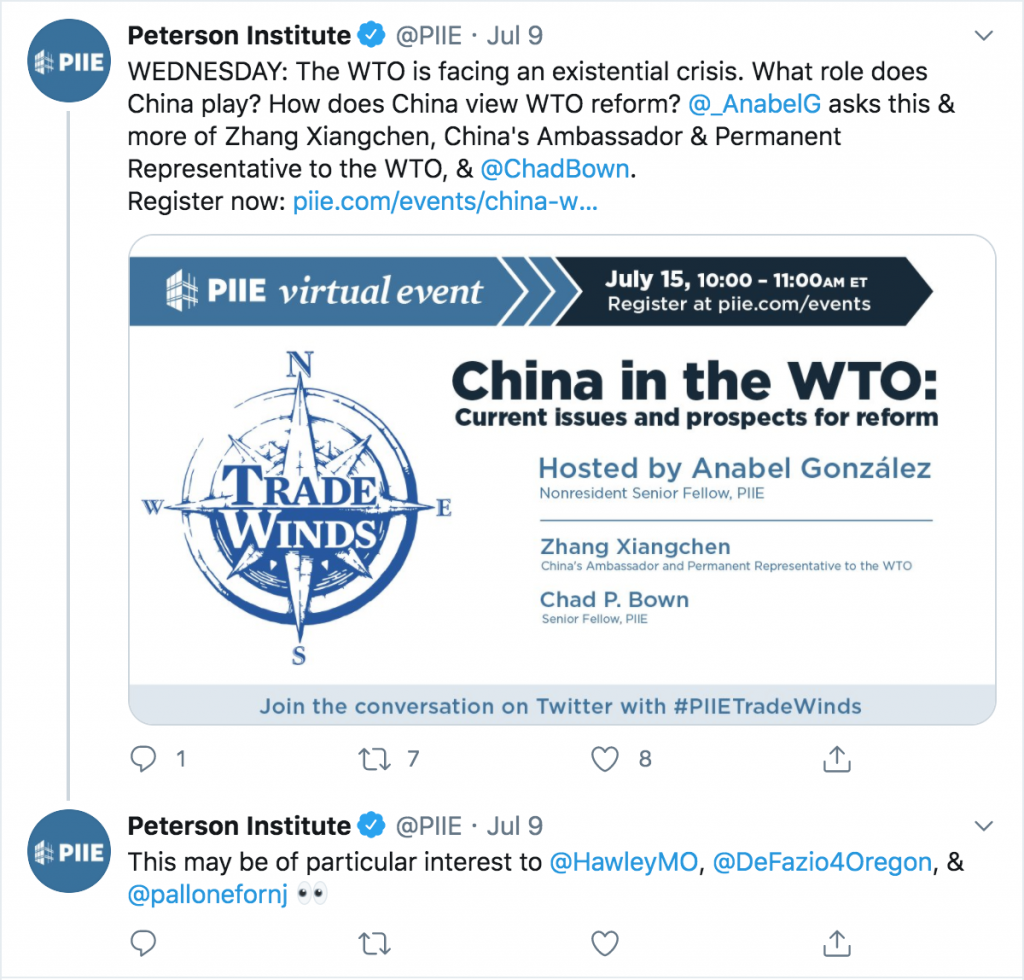 PIIE has benefited from its ties with the Chinese elite, receiving nearly $400,000 between 2010 and 2018 from Huawei, a Chinese tech giant indicted by the federal government, according to PIIE president Adam Posen. The think tank has also received hundreds of thousands of dollars from an anti-democratic Hong Kong billionaire and a nonprofit widely considered a front group for the Chinese government's influence-peddling operations.

Groups and individuals linked to the regime have poured millions of dollars into Washington, D.C., in an effort to shape policy. Hawley said PIIE's partnership is just another example of the Chinese Communist Party (CCP) finding a receptive audience among the American elite, whether it be in D.C. think tanks or corporate boardrooms.

"That the Chinese government and its party propagandists should be given a platform to extend their influence in the U.S. is disappointing, to say the least," Hawley told the Washington Free Beacon.

Posen told the Free Beacon that the think tank "essentially fired [Huawei] as a donor" in 2018 when the extent of its national security threat became public knowledge. He also said that Huawei’s donations did not have ties to any specific research done at the think tank. The institute’s spokesperson added that PIIE regularly hosts government officials from a variety of countries, including China, to "encourage an open exchange of views."

PIIE has cultivated close ties with Chinese elites, inviting senior officials to speak at its annual symposia cohosted with the China Finance 40 Forum (CF40)—a state-backed think tank headed by several senior CCP officials. The symposium has functioned as a highly visible platform for senior officials to not only criticize the Trump administration's trade policy, but also tout the Belt and Road Initiative—the controversial program accused of being a conduit for Chinese influence in developing countries. Past panelists have included China's vice minister of finance and the vice chairman of the Chinese People's Political Consultative Conference, a political advisory body for the regime.

"The Trump administration’s unilateral approach to trade disputes is counterproductive," the chapter reads. "Whatever the merits of U.S. economic complaints regarding trade with China, the use of unilateral tariff threats as a means to achieve economic ends is a mistake."

The think tank says it discloses any possible conflicts of interests in books and reports. PIIE has been inconsistent, however, in its disclosure of ties with Huawei. PIIE disclosed its prior ties with Huawei in one December 2019 articleabout the tech giant, but did not do so for a different article published in the same month that criticized U.S. regulations aimed at Huawei and other Chinese tech companies as "unacceptably broad."

While the think tank states in its disclosures that it "ended its relationship" with Huawei in 2018, PIIE continues to retain Georgetown professor Theodore Moran—listed on PIIE's website as a member of Huawei's International Advisory Council—as a nonresident senior fellow. Posen said that Moran's relationship with Huawei is "completely separate" from his role at PIIE. Moran told the Free Beacon that he has not been a member of Huawei’s advisory council for the past 10 years. Moran's claim is not true, since Moran was pushed to resign from the National Intelligence Council in 2013 when his Huawei ties surfaced. His current bios on both the PIIE and Georgetown website list him as a current member of the Huawei council, as do other websites. When the Free Beacon presented these facts to Moran, he said that the Georgetown bio is not up to date.

"This is getting tedious. good bye," Moran responded in an email.