In the last two years, the US solar manufacturing industry has rebuilt itself and reached a stronger position than at any time in a decade, helped by tariffs on imported solar modules produced by subsidized Chinese companies. The US now has two gigawatt (GW)-scale module producers in First Solar and Q Cells. In addition, another dozen or so firms bring U.S. manufacturing capacity to over 5 GW. With many US producers hoping to expand production, the US could be on a strong path to meeting all or more than the U.S. demand for solar panels.

However, a recent wave of investment and capacity expansion announcements by China’s largest solar manufacturers threatens the recovery with massive overcapacity that will drive US producers out of the business, and establish Chinese domination of the entire solar power manufacturing supply chain. These latest expansion plans effectively double the capacity of the Chinese industry. This could repeat the pattern we have seen in other industries, from steel to face masks, where China’s strategy of government-funded overcapacity drove other producers out of the market and made the world dependent on Chinese suppliers.

The new investment in Chinese solar production was announced over the course of 2020 and is part of the Chinese Communist Party’s industrial strategy. Industry publication PV Tech described the scale of those capacity expansions as “jaw-dropping.” Eight of the world’s top ten solar module manufacturers are Chinese companies. Most of those companies have announced expansion plans. Most of the new facilities are in China. Some are in Southeast Asia, which appeals to Chinese producers because manufacturing outside China can avoid US antidumping and countervailing duties.

PV Tech estimates that Chinese module production is set to rise by 91 percent this year over last, a stunning increase in a single year. At that rate, the top Chinese producers would be shipping 180 GW of modules around the world, which is 25 percent more than likely demand this year, according to a forecast by Info-Link. With such a huge burden of oversupply, price declines, bankruptcies, and consolidation could follow. In other words, there is a danger that US producers get pushed out of the market once again, just as they did a decade ago. 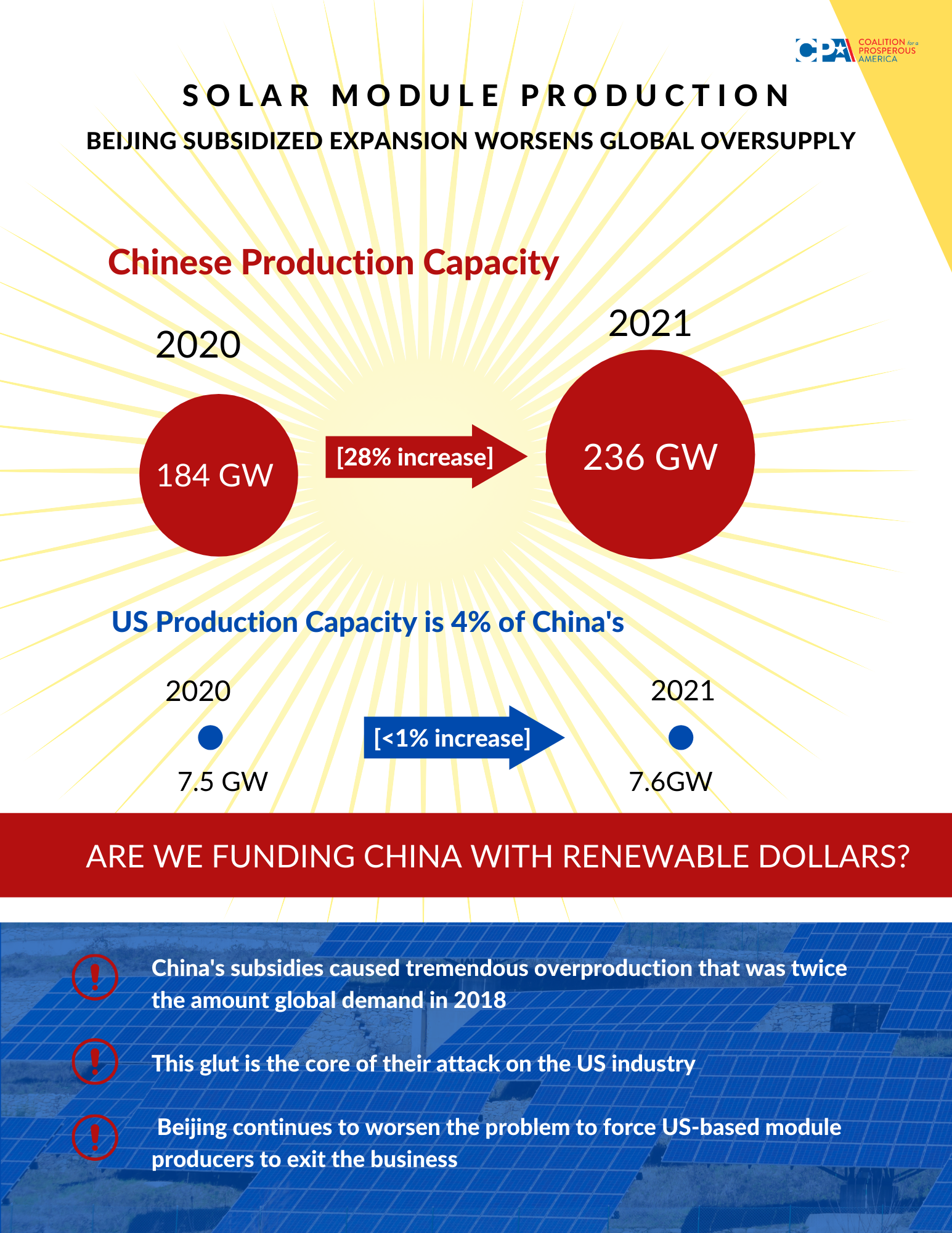 Chinese expansion plans are detailed in Table 1. The figures are based on announcements made over the past 12 months by each company. Each of these companies is investing billions or hundreds of millions of dollars in additional capacity. Western companies typically boost capacity in their business in line with forecasts of growing demand for their products. But China’s solar industry is driven by a different dynamic: In the Made in China 2025 plan, published in 2015, the Chinese government identified renewable energy as one of 10 key growth industries for China. According to one report, China set a target of 3 trillion renminbi (about $500 billion) in total revenue for China’s renewable energy industries (solar and wind power), with 25 percent of that total exported to markets outside China. This growth rate far exceeds the likely growth in demand. The Chinese government drives Chinese companies to reach for extraordinary targets through a combination of cheap finance to the producers and a mix of incentives and targets to the purchasers to encourage them to buy the equipment often before they actually need it. For example, local Chinese governments and local power companies are given targets for the share of their energy that must come from renewable sources. So-called feed-in tariffs require the power companies to purchase solar power from individual homeowners at prices set by the Beijing government. Western standards of growth and profitability do not apply once a sector is targeted by the Chinese government for strategic growth.

Another form of subsidy for the Chinese solar industry is the use of forced labor in the Xinjiang region in the west of China. Widespread use of forced labor in the manufacture of polysilicon, the raw material for solar cells, was publicized by the New York Times earlier this month. China produces 82 percent of global polysilicon, and about half of it comes from Xinjiang according to industry analysts IHS Markit. The US polysilicon industry is smaller but has tremendous growth potential. Polysilicon is another industry sector that the US should act to support growth here at home, supplying US cell and module makers.

Table 1. Chinese solar module capacity expansion likely to drive up production this year by a “jaw-dropping” 91%

The Info-Link demand forecast, like many other forecasts, sees worldwide solar power installations rising by 15 percent this year, a strong growth figure in the electricity industry where growth is usually measured in sub-5 percent increments annually.

The US industry has been growing steadily in the three years since the 2018 Section 201 tariffs were imposed to restrain solar module imports. China’s investment campaign, and their focus on exporting into “soft” markets like the US (and Europe) could derail all that. The US government needs to be ready to take a strategic decision if Chinese solar modules begin to flood the market once again later this year. The Section 201 tariffs, soon to be at just 18 percent, may not be enough to protect the US suppliers from cratering prices. If that happens, the government will face a decision on whether to support the continued growth of the US industry, or to give up and allow solar to become yet another industry where China dominates world production and every other nation risks becoming hostage to the decisions of the Chinese government. We saw how that turned out for protective gear (PPE) during the COVID crisis last year.