LONDON (MarketWatch) — Building a wall along the border with Mexico. Launching a trade war with China. Scrapping the Trans-Pacific Partnership, and rethinking the involvement of the United States in trade agreements around the world.

When he moves into the White House in January, President Donald Trump will have plenty of options for making good on his campaign promise to use tariff barriers to rebuild American industry.

There is one potential trade war, however, that few people have so far noticed — but which could soon be his easiest target. Germany. Given the size of its population, it runs a far larger trade surplus than China — and a massive surplus with the U.S. in particular. Even better, the industries to pick off are relatively simple to identify, and would actually have a chance of creating well-paid American jobs.

Heck, Trump would even be settling a family score — the Germans deported his grandfather, Frederick Trump, for draft-dodging. They might be feeling nervous about Jan. 20, the day of Trump’s inauguration, in Beijing and Mexico City — but the place they should be feeling really nervous is Berlin.

When Trump confounded expectations earlier this month, and brushed aside Hillary Clinton to win the presidency, world leaders were not exactly falling over one another to congratulate them. Few had wanted him to win. Even so, the message from German Chancellor Angela Merkel was especially chilly, making plenty of pointed remarks about liberal values and shared responsibilities.

To most commentators, that was a reflection of Merkel’s commitment to tolerance and openness, which are certainly among her best qualities. But it may have reflected something else as well. Trump’s campaign rhetoric about ripping up free-trade agreements, and about protecting American industry, must sound troubling to anyone who is aware of what keeps the German economy ticking.

In Germany, the threat its massive trade surplus with America has already been noted. The influential and well-connected magazine Der Spiegel ran an article in the wake of his victory saying that Germany was preparing itself for a trade war with Trump’s America. The country’s Economics Ministry has, the magazine reported, been told to start putting together the counter-arguments against tariffs barriers — pointing out that it is the result of the country’s aging population and the structure of its industrial base.

If there is to be a diplomatic war over the issue, Germany wants its ground to be well-prepared.

Is it right to be worried?

Last year it hit 8.9% of gross domestic product, and it is likely to break through 9% before the end of 2016. Globally, it is second in size only to China’s, but given that Germany is a far smaller country, it is only fair to measure it on a per capita basis — and when you look at it that way, Germany’s surplus is seven times bigger than China’s.

Even worse, China is a developing country — and those are generally expected to run surpluses as they build up industries through exports. Over time, those surpluses come down, as domestic demand grows, and that process already seems to be underway in China. In contrast, Germany is a mature industrial economy, and yet its surplus keeps on growing relentlessly.

In truth, Germany has become a machine for dumping deflation on the rest of the world. 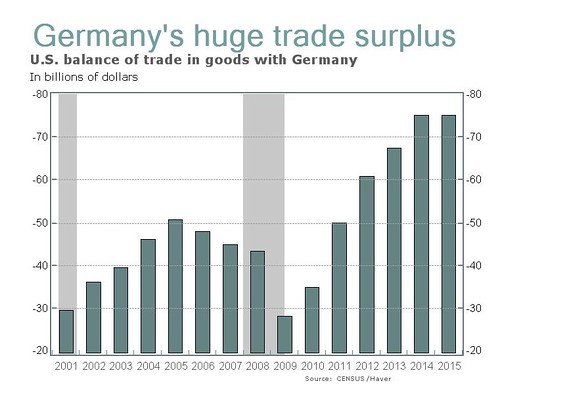 Germany has a massive trade surplus with the United States, and most of those imports are high-value goods such as automobiles, chemicals, and machinery.

Its surplus with the U.S. is particularly acute. According to U.S. government figures, the country ran a deficit with Germany of $74 billion in 2015. Go back to 2006 and that was only $47 billion — it has almost doubled in a decade, and keeps on growing.

Out of the total deficit for 2015 of $531 billion, Germany accounted for 14% of it, an impressive achievement given that Germany only accounts for 4.6% of the global economy. If you are sitting in the White House, thinking that you want to do something about the deficit, then it makes a lot more sense to concentrate on Germany than Mexico or China.

That is not all.

Much of Germany’s trade surplus is clearly the result of currency manipulation. The euro EURUSD, -0.6009%  has depressed the real value of the country’s exports, allowing it rack up those huge exports. You can argue about whether China’s currency USDCNH, -0.0492%  is really at its fair value or not — but no one can really dispute that Germany’s currency is way, way below what it would be if it still had the deutschemark.

Even more significantly, there would be some real gains from taking action. When Trump talks of bringing back well-paid manufacturing jobs, it is hard to see how a trade war with China would help. Blue-collar workers in Michigan don’t really want to assemble toys 12-hours a day on near-starvation wages, which is what a lot of Chinese laborers do.

But Germany’s exports to the U.S. are high-end goods such as automobiles, which account for 12% of its exports by themselves, followed by vehicle parts, chemicals and aerospace. Those are precisely the kind of well-paid jobs that Trump voters thought their man would deliver for them.

So could Trump launch a trade war with Germany?

Under World Trade Organization rules, it would not be easy. It is very hard to impose unilateral tariffs on one country without ripping up the entire network. But that doesn’t mean that he couldn’t find a way. Volkswagen’s VOW, +0.13%  diesel scandal, for example, might be the perfect excuse to slap punitive restrictions on the German car industry. Likewise, its medical exports can always be deemed “unsafe.”

If Americans had to ditch their BMWs for Cadillacs and Lincolns, that would certainly create a few decently paid jobs.

The European economy has plenty of problems to contend with right now — from the upcoming Italian referendum, to negotiating the U.K.’s exit from the European Union, to finding a way out of its ongoing slump.

A trade war between the United Sates and Germany is probably the last thing it needs. But if Trump wants to make good on some of his pledges, restrictions on German exports are the easiest way to do that — and that means it can’t be ruled out.