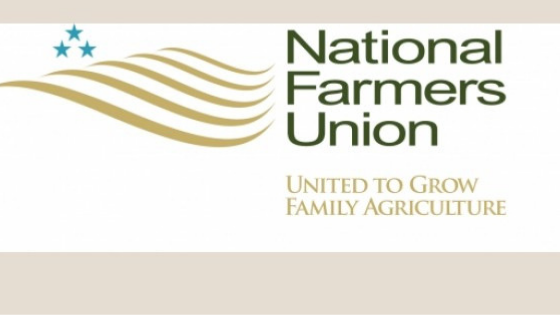 BELLEVUE, Wash. — Farmers at the 117th anniversary convention of the National Farmers Union this week had the same worry as the ones who attended the organization’s first gathering more than a century ago — low incomes.

The 460 conventioneers saw graphs projected on large screens. Upward lines showed yields. Downward lines tracked prices. The lines should lead to a national policy to manage supply, Michael Stumo, head of the Coalition for a Prosperous America, told the convention.

“The laissez-faire, free-trade approach just burned up our countryside,” he said.

The Farmers Union, smaller but older than the American Farm Bureau Federation, held its three-day convention, Sunday through Tuesday, at a Hyatt Regency hotel in a Seattle suburb. The organization has a national reach, including a Northwest chapter, but most members are from the Upper Great Plains.

The union took off in the early 1900s, driven by the idea that farmers should organize, control supply and set prices. That’s what farmers should do now, Minnesota corn and soybean farmer Ted Winter said. “We need to re-create the value of the Farmers Union.”

The convention’s first day featured a panel on trade that included Stumo, whose organization says it includes liberals and conservatives. Stumo, whose background is in law, mocks economists’ rock-ribbed allegiance to free trade, which he says is a myth anyway.

“Free-trade doesn’t exist. It’s a pink unicorn. People have never seen it, but people like to talk a lot about it,” he said.

Stumo acknowledged “ideological hurdles” in advancing a policy based on less agricultural production, plus price supports. “I don’t expect to be hoisted up and cheered,” he said.

“We think we are in a world of scarcity, where everyone is dying to buy U.S. stuff, “ he said. “We’re in a world of glut. We need a policy that’s based on glut, not on scarcity.”

Stumo agreed times are tough for farmers, but attributed that to a strong U.S. dollar and overproduction that predates retaliatory tariffs imposed on U.S. farm goods.

In the same report, the agency projected that farmers will generally become more productive. Farmers are expected to get more milk from their cows, harvest more bushels of wheat per acre and cultivate more pounds of rice per acre.

The Agricultural Adjustment Act of 1933 was the first major price-support and acreage-reduction program, according to a USDA history of farm policy. Farm net income in 1932 was less than one-third of what it had been in 1929. The act sought to restore farmers’ purchasing power to the levels of 1909-14, a period of relatively stable prosperity.

Johnson, who was elected North Dakota agriculture commissioner that year, said subsequent farm bills have not offered incentives to reduce production. The 2018 Farm Bill has a safety net for farmers, but “it’s not as robust as it needs to be, in my judgment,” he said.

The solution, Johnson said, is pay farmers to take land out of production and increase payments if prices fall below levels fixed by the government.

“We cannot trade our way out of this problem, which is why we need policies that address oversupply,” Johnson said. “Every other industry has the ability to shut down a plant.”

Winter, the Minnesota farmer, agreed. He cultivates 250 acres. With prices low, it’s hard to make a living, he said. And if small farms go under, so will small towns, he said. “You end up with communities with nobody in their schools.”

In contrast to the Farm Bureau, the National Farmers Union has been skeptical about trade deals, sometimes hostile. The Farmers Union advocated withdrawing from the Trans-Pacific Partnership that included 12 Pacific Rim nations and renegotiating the North American Free Trade Agreement with Canada and Mexico, campaign pledges fulfilled by President Donald Trump.

The Farmers Union also agrees with the Trump administration about challenging China’s business practices, even though China has retaliated with tariffs on U.S agricultural products.

“It sounds really sort of tacky to say that China lies and cheats and steals, but, in fact, those have all been proven over and over and over again,” Johnson said.

The Farm Bureau, at its national convention this year, gave Trump a boisterous welcome, but passed a resolution favoring negotiations over tariffs to resolve trade disputes.

But while warm to Trump’s policies, Johnson criticized the president’s approach.

“I, for the life of me, don’t understand how it is that someone who is the world’s greatest negotiator thinks that it’s in our best interest to first deeply offend everyone you want to talk to and get them to agree with you,” Johnson said.

The applause started before he finished the sentence.

Johnson continued: “Our reputation is in tatters, and I think our standing in the world has been significantly reduced as a result of what has happened in this arena in the last couple of years.”

After the speech, Johnson affirmed the Farmers Union agrees with Trump’s trade goals, though he added, “It’s not always clear what he’s up to.”

Major Washington crops such as apples, cherries and wheat report losing sales because of tariffs.

“There’s a lot of short-term collateral damage that has to be dealt with,” said Washington State Department of Agriculture Director Derek Sandison, who attended the Farmers Union convention Sunday.

Stumo says Trump is winning on trade. He calls Robert Lighthizer the best trade representative that U.S. has ever had and that Trump’s “pro-growth tariffs” are restoring America’s manufacturing base. And so far, they have not driven inflation, he said.

“If I were king, I would not have done the same tweets as our president did, but in other ways I would do some of the same thing,” he said.

Soybeans, by far America’s top agricultural export, have taken a hit in China. But Stumo observed that the tariffs have caused only a slight decline in overall farm exports.