Excerpt: The study states that the tariff would stimulate the economy through two channels.

The Coalition for a Prosperous America (CPA) released updated study results in July showing that a permanent across-the-board 25 percent tariff (PATB-25) on all imports from China would stimulate GDP growth and jobs in the U.S. economy.

According to the study, the United States would see growth as manufacturing jobs would be redirected to the country, while the average cost of imports would decrease as trade opportunities opened up in other countries.

The full report states: “The tariff revenue totals $547 billion over five years. If those funds are reinjected back into the economy each year, this additional stimulus to growth results in a $167 billion boost to GDP and 1.05 million additional jobs in 2024.”

The report indicates that other study models reflect a pro-free-trade bias and assume that no production will return to the United States as a result of tariffs, prices of U.S. imports always rise when imports move from China to other countries, and U.S. consumers react negatively to higher prices, leading to reduced sales.

The study states that the tariff would stimulate the economy through two channels.

First, the relocation of U.S.-bound production from China to other nations would lead to a reduction in the average cost of imports because many alternative production locations, such as those in Southeast Asia, have lower production costs than in China.

Second, because a portion of the production in China would relocate to the United States, it would directly stimulate the U.S. economy.

Regarding tariffs, Ferry said: “As time goes by, people are accepting it because they’re seeing that tariffs are not provoking huge increases or any increases in consumer prices. They’re not disrupting our supply chains.” 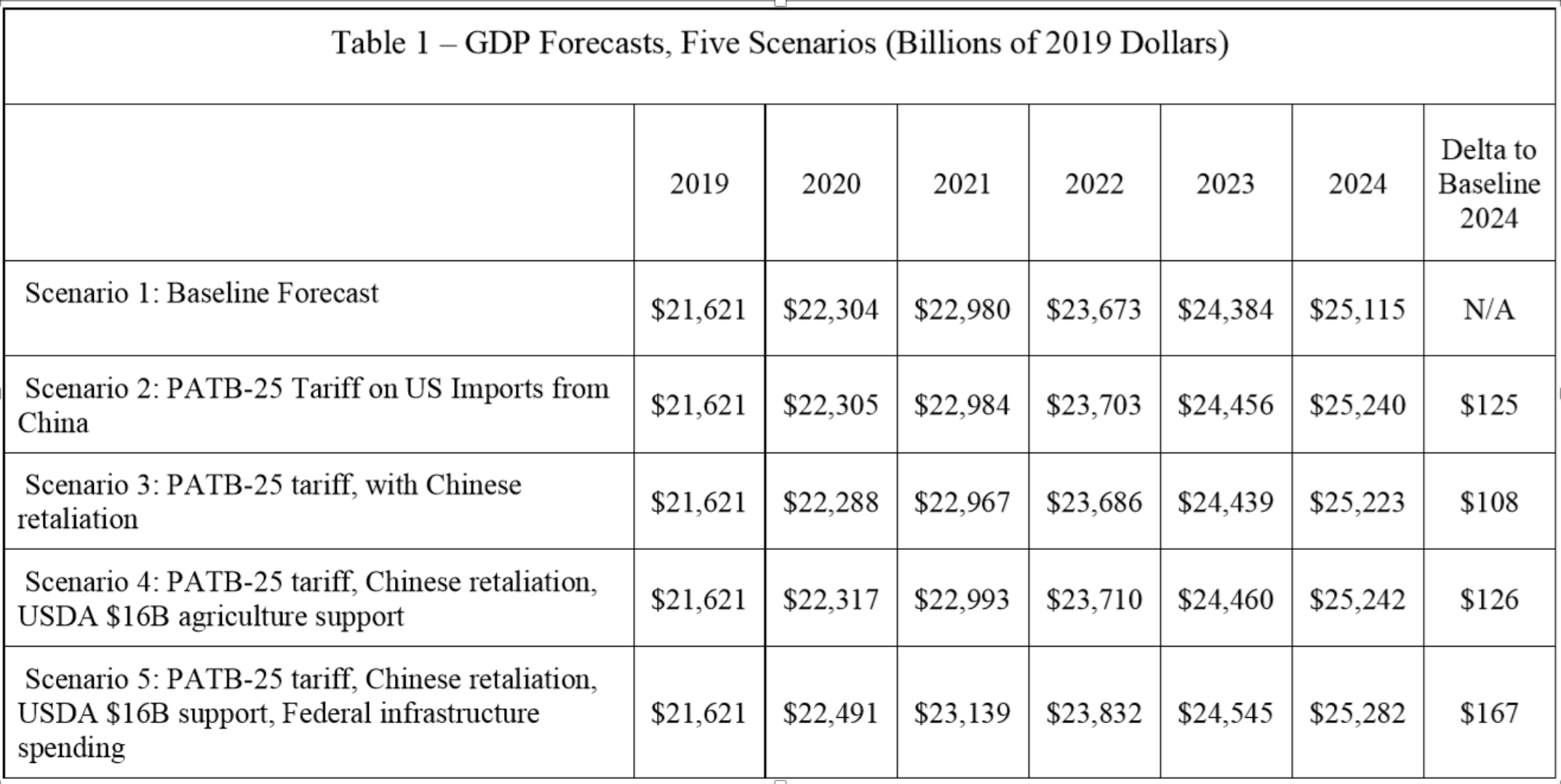 According to the study,a balanced view of these effects shows that tariffs imposed on a nation with which the United States has a trade deficit will produce positive effects as the U.S. economy responds to the stimulus of demand-redirected U.S. production.

A small, steadily growing portion of U.S.-destined China production would also leave China and relocate to the United States. In 2024, this would equate to $69 billion worth of production, equivalent to 13 percent of the 2018 level of U.S. imports from China, the study shows.

Another benefit of the move of billions of dollars of U.S.-bound production to third countries is that, in future years, those U.S. imports are more likely to lead to increased U.S. exports than if such production had stayed in China.

The stimulus effect is expected to be felt most strongly in manufacturing, because manufactured goods currently make up the majority of U.S. imports from China. Manufacturing jobs would increase by 192,000, or 27 percent of the additional jobs that would be created by the permanent 25 percent tariff.

Earlier in the year, China announced retaliatory tariffs on $60 billion dollars’ worth of Chinese imports from the United States, taking effect on June 1, 2019.

CPA stated that this negatively impacted the U.S. economy, causing its exports to decrease. However, the impact is insignificant when compared to the positive impact of tariffs on over $500 billion of U.S. imports from China.

In May 2019, U.S. Secretary of Agriculture Sonny Perdue announced a U.S. Department of Agriculture financial support program for farmers, which would provide relief for the agricultural industry for financial injury caused by Chinese retaliatory tariffs.

Ferry said that the goal of the U.S. government is to fix these problems and to restore prosperity to the United States, and he thinks tariffs have their role to play.

“If the trade deficit continues, and if we want to see certain manufacturing industries grow in the United States, I think we need to do more, and tariffs on all Chinese imports is a good solution,” said Ferry.

“It’s a delicate and dangerous game [the Chinese regime is] going to have to play to pivot from being an economy that’s completely dependent on exports to being a more balanced economy, and it’s anybody’s guess whether they can pull it off.”

Ferry is an economist with 15 years of experience in the technology industry and in a number of networking companies in Silicon Valley. He also served as a member of an industry advisory committee at the U.S. Department of Commerce.