A Republican proposal aimed at cutting tax rates and keeping jobs in the U.S. risks whacking the earnings of big U.S. retailers by driving up the cost of imported clothes, furniture and other goods.

The earnings hit to six big retailers could total nearly $13 billion, according to RBC Capital Markets analyst Scot Ciccarelli, with Best Buy Co.’s annual earnings wiped out. To offset their higher tax bills, retailers would need to increase revenue by raising prices for consumers, he said.

Representatives of Wal-Mart, Genuine Parts and Best Buy declined to comment. A Costco spokesman said it is too early to assess the impact of the tax proposals. Dick’s didn’t return calls for comment or respond to an email.

More broadly, the proposed tax adjustments could spell an end to an era of cheap apparel for consumers, according to Brian McGough, an analyst at Hedgeye Risk Management LLC.

In a report released Wednesday, Mr. McGough said consumer apparel prices could rise as much as 15% from the tax plan, “with specialty apparel being the category most at risk given the mix of imported merchandise.”

The proposal would cut the corporate tax rate, let multinational firms repatriate foreign profits and allow companies to write off capital expenses immediately. At the same time, the “border-adjusted” portion of the proposal would impose taxes on imported goods by making imports a nondeductible expense, and exempt exports.

Authors of the Republican tax plan crafted it to spark economic growth and reduce the incentives for U.S. companies to shift jobs, profits and headquarters out of the country.

Gauging the plan’s impact on retailers is difficult because most don’t break out what percentage of their inventory is imported, and even goods produced in the U.S. can rely on imported material. Also, it isn’t clear how any final change in policy will be shaped by a Republican-controlled Congress or a Donald Trump presidency.

Still, many investors expect the U.S. retail industry could be hit particularly hard because of the number of companies selling apparel and household goods made almost exclusively overseas.

In a note to clients Wednesday, Jessica Schoen Mace, an Instinet LLC analyst, said retailers “with a higher percentage of goods sourced from abroad, as well as those with lower product margins, will be more pressured.”

Trade associations for large retailers are taking aim at the plan. “This is a scary proposal with a lot of unknowns which will lead to a much higher effective tax rate” for retailers, said David French, senior vice president of government relations for the National Retail Federation.

The House version of an expected tax overhaul faces obstacles but currently it is the most complete proposal. It has the support of party leaders who are working to write up the measure as a bill. Senators and Mr. Trump haven’t yet endorsed the House version of the tax plan. 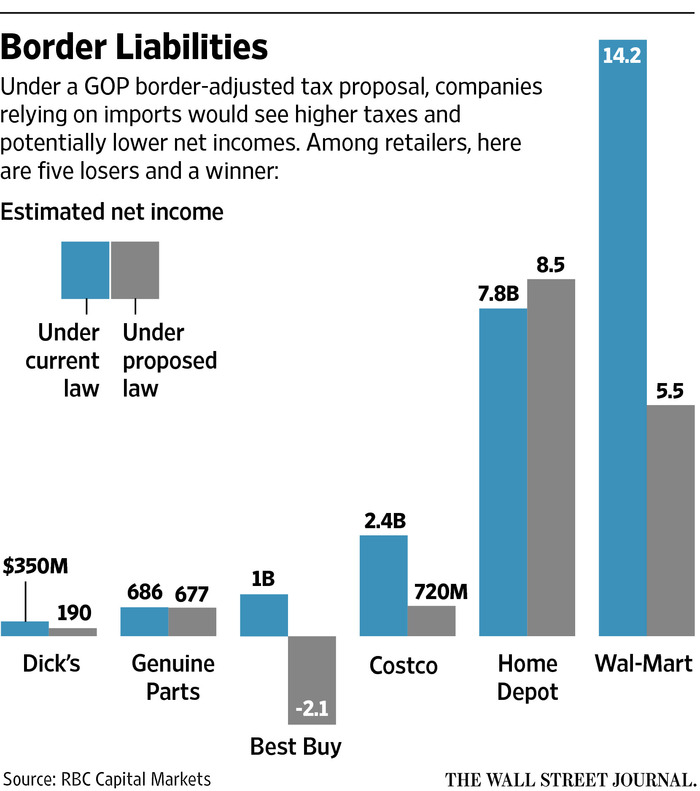 The tax bills of six large retail companies combined would jump by about $15 billion, to about $28 billion under the Republican plan, according to Mr. Ciccarelli’s analysis.

Some economists and advocates of the plan say currency-rate adjustments will offset the tax changes and mute retailers’ objections. They see the U.S. dollar strengthening, making imports cheaper.

Tax experts estimate a border-adjusted tax could raise as much as $1 trillion in revenue; without it, the Republican plan wouldn’t add up.

Mr. Ciccarelli estimates that a border-adjusted tax would increase Wal-Mart’s annual tax bill to $16 billion from $6.6 billion. The tax increase could lower its annual net income to $5.5 billion from Mr. Ciccarelli’s estimate of $14.2 billion now, he says. The analysis assumes that Wal-Mart imports directly 20% of its goods, while another 15% are foreign made and sold to Wal-Mart by domestic suppliers.

Costco’s tax bill could rise to $3.2 billion from $1.2 billion; earnings could fall to $720 million from an estimated $2.4 billion, assuming Costco imports 15% of its goods directly with another 10% being foreign-made from U.S. suppliers.

Best Buy’s tax bill could climb to $3.8 billion under the proposal from $600 million now. That would wipe out the company’s earnings this year of an estimated $1 billion, and turn it into a loss of $2.1 billion.

Best Buy imports an estimated 65% of its goods, analysts said, with an additional 20% being foreign-made from domestic suppliers.

At the same time, the Republican plan would cut corporate tax rates to 20% from a top federal rate of 35%. The ability to immediately write off capital expenditures under the Republican proposal would also be positive for some retailers.

Those changes would help Home Depot Inc. offset the negative impact of the border-adjusted tax, analysts said. Although its tax bill would rise slightly, to $4.8 billion under the plan, its annual net income would rise to $8.5 billion from $7.8 billion after deducting capital expenditures immediately, according to Mr. Ciccarelli.

Still, analysts said that for many retailers, those tax benefits wouldn’t be enough to offset the impact of a border-adjusted tax.