Editor’s note: CPA congratulates our longtime member Bill Hickey for receiving the Steel Executive of the Year award from the Association of Steel Distributors.

The official work history of William “Bill” M. Hickey Jr. may be complete, but Hickey is still writing his story. The focus is no longer on the family business, Lapham-Hickey Steel Corp., but on something much larger—the steel distribution and manufacturing segments of the domestic economy.

After 40 years as company president, Hickey gave up the day-to-day operations of the service center, which was founded in 1926 and now has 10 locations with approximately 700 employees, to the fourth generation of the family members about a year ago. Brian Hickey is now president, and Will Hickey is chief commercial officer. Laura Hickey works as a project manager, heavily involved in operational and systems integration with the company’s multiple locations, which includes a couple of acquisitions made in recent years.

Now Hickey is looking to continue his industry work, in which he was already actively involved during his work career. In the past he has served in national leadership positions for the Metals Service Center Institute and is currently a member of the Chairman’s Emeritus Council. Because of his willingness to be recognized as a spokesperson for the industry, he also was appointed to the ITAC 7, an advisory committee to the Department of Commerce and the U.S. Trade Representative, holding the position of chairman of the committee for four years and still remaining an active member. He is also past chairman of the Illinois Manufacturers Association, on which he still sits on the board of directors, and a trustee for the Precision Metalforming Association Educational Foundation.

Hickey’s successful career leading a major steel distribution company and continued dedication to promoting manufacturing and the steel industry on the national stage have earned him numerous awards throughout the years. The latest is the Steel Executive of the Year Award for 2019 from the Association of Steel Distributors, which made it a point to call Hickey “one of the steel industry’s strongest advocates” in the news release announcing the honor. (The Steel Executive of the Year Award ceremony and dinner will take place on Tuesday evening, March 3, 2020, at the Hyatt Regency Hill Country Resort in San Antonio, Texas. The ceremony is part of the Fabricators & Manufacturers Association’s Annual Meeting.)

The FABRICATOR had the chance recently to interview Hickey and learn more about his career and what he’s doing with his time now. An edited transcript follows.

The FABRICATOR: After 40 years leading Lapham-Hickey and being able to hand the business over to the fourth generation of Hickeys, would you say that steel is in your blood?

Bill Hickey: Well, I would think so. We all seem to have picked up the same hereditary gene.

FAB: How do you think you’ve been able to successfully keep the family company thriving from one generation to the next, which is not the easiest thing to do?

Hickey: That’s a great question. I really don’t know the answer to that, but I can give you some of the insights. My father passed away in 1977, so I ran the business for a long time. In that time the service center industry has substantially changed, as all industries have over the last 40-plus years.

One of the things that I saw was that the World War II generation who were transitioning their businesses to the next generation of family had difficulties. In some instances, the children just didn’t want to do it. They did something else. 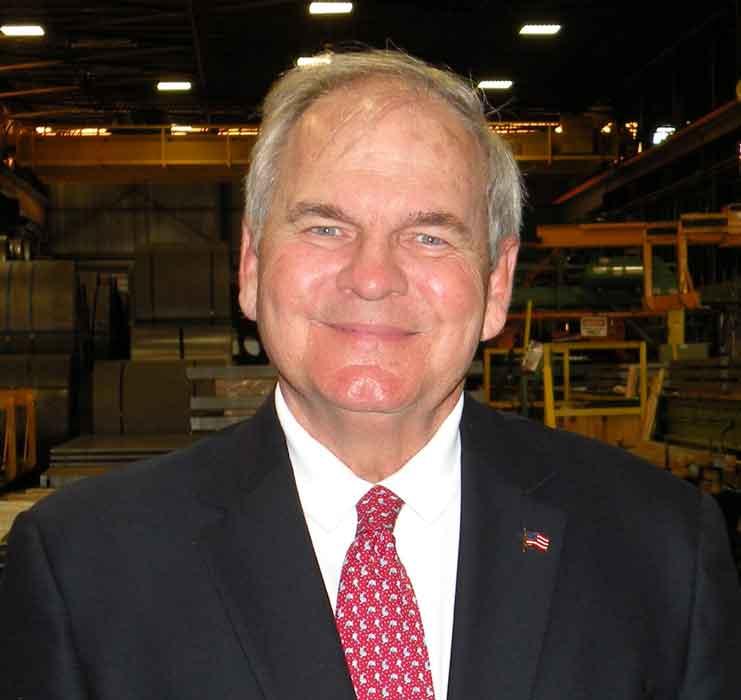 The Association of Steel Distributors named Bill Hickey, chairman, Lapham-Hickey Steel Corp., as its Steel Executive of the Year for 2019.

FAB: What does it mean to you to be recognized with the Steel Executive of the Year Award for 2019?

Hickey: Well, I was pretty shocked because I’m really not doing a lot in terms of the day-to-day operation of the business. But I am involved in a fair amount of discussions about the right types of policies we need as a country in order to have a better manufacturing environment.

You have to remember that manufacturing creates wealth. Wealth that is created in manufacturing is really spread amongst all the participants in the system. And if you look at the process of taking raw material to creating a finished product, everywhere along those steps in the supply chain, somebody gets the opportunity to get a job and to create income for themselves and their family.

That’s one of the things that certainly the Chinese understand. But the problem is that in China the state owns the means of production. It’s certainly not a free enterprise system or a market economy that we still have here in the U.S.

But part of it is our own fault because we allowed it to happen. A lot of companies moved a lot of assets to China, and a lot of people were put on the unemployment line here in the U.S. over the last 20 years. And anybody who believes that you’ll be able to have a stable supply chain coming from China over the next couple of decades certainly has to be naive.

FAB: With the threat that China poses, what do you think are the biggest obstacles to maintaining a vibrant manufacturing economy here in North America?

Hickey: Around 2002 I gave my first public speech about currency valuations, specifically targeting the devaluations the Chinese government had done to become a powerhouse in manufacturing. I certainly believe that the world has changed and we have a global economy, but there has to be some type of system of balancing these economic actions that countries take. For instance, in the European Union, all the manufacturing goods we send there have a [value-added tax] attached to them of at least 20 percent. That’s about a 20 percent increase in the cost of the product. So the $40,000 to $50,000 Ford Explorer we make on the South Side of Chicago has that tax applied to it when it’s shipped to Germany. Now the $100,000 Mercedes that is shipped out of Germany gets at least a 20 percent tax rebate because they get the VAT rebated from the German government. When that $100,000 car lands in the U.S., it basically lists above $80,000, depending on the freight cost. So they’re subsidizing their exports and taxing our manufactured goods.

What do you think the merchandise balance of trade is with Germany? It’s very positive for Germany, and it’s all exports. The German economy has about 8 to 10 percent of its GDP in surplus, and it’s exports. Yeah. We have 4 to 5 percent of our GDP in deficit. It’s all imports from places like Europe, China, and Mexico.

You know, if Congress would do something about approving the U.S.-Mexico-Canada free trade agreement, that would certainly help level the playing field. When we got into NAFTA, one of the first things that the Mexicans did was devalue their currency. At that time the peso was 33 cents to the dollar. Today it’s 5 cents to the dollar. Since this has happened, people are not increasing their standard of living. They are working for slave wages. That’s why you have this huge problem with the balance of trade and you also have this huge problem with the migrants.

FAB: Did you see yourself becoming this type of an industry spokesperson, doing what you can to support domestic manufacturers?

Hickey: I really didn’t see it happening. It just came up. We started to do town hall meetings about industrial manufacturing through the Metals Service Center Institute, and I remember the first one we did was in 2002 in the suburbs of Chicago. We had a couple hundred people there, and we invited some politicans, some showed and some didn’t. And for everyone who didn’t show, we shared their phone numbers with those in attendance. We asked them to call and find out why they didn’t want manufacturing in the U.S. Over the next couple of days, we got calls back from all those offices saying, “We blew this. We should’ve been there.”

That’s the point. The majority of the elected officials in this country, especially in the U.S. Congress, just absolutely have no clue about manufacturing. They’re lawyers. They become county prosecutors. They become district attorneys and state attorneys. Then they get elected to the House or the Senate. They just don’t have the understanding about manufacturing and the understanding of risking your money to build a dream of making a product or service. The problem is, when they make the rules, American manufacturers have it harder than competitors in other parts of the world. Somebody has to start talking about leveling the playing field.

FAB: Do you get a sense that the steel distribution and manufacturing industry is in a better place compared to when you first entered it?

Hickey: The industry is in a good place because of the fact that people in the service center business and the fabrication business are certainly smarter, better decision-makers, and more nimble than their predecessors because these marketplaces have driven them to be like that. There was the massive consolidation in the domestic steel industry. Then you had the newcomers, like Nucor and SDI.

One of the main reasons is the energy situation in the U.S. With fracking and natural gas, energy is affordable, and you’re certainly not near peak production. It has been an economic boon for an extended period of time for some parts of the country, and this raw material extraction and refinement brings wealth to everybody in the supply chain.

FAB: What advice do you have for a young person who is looking for a career path but has not looked at the steel industry or manufacturing?

They will be able to find satisfaction at the end of the day when they go home. They can look back at what a great job they did making a part, an assembly, or an end product.