Brose hired an additional 30 workers to staff the paint process, bringing its UK workforce to nearly 1,000. Juergen Zahl, president of the UK branch of German-headquartered Brose called the Coventry expansion a “massive show of faith” in Britain’s position in the global auto industry.

“Brose is committed to growing our UK operation.,” Zahl explained to a Coventry newspaper. “Coventry was our first non-German site and, operationally, is now performing at a level which secured us Cranfield University’s Best Factory Award in 2016.”

You wouldn’t know about this business expansion if you are a New York Times reader. On Oct. 31st, the Times ran a doom-and-gloom story entitled “What’s the Economic Cost of Brexit?” The reporter quoted economists and others bemoaning the alleged “uncertainty” caused by Britain’s decision to pull out of the European Union by March 2019. Like the witches in a Shakespeare play, British economists have been offended that the electorate ignored their dire warnings and have sought to cast a spell over the economy ever since the ides, sorry the 23rd, of June 2016. Yet despite the constant drumbeat of gloomy forecasts, political disunity in Westminster, sudden departures from Theresa May’s Cabinet, and the growing difficulty of negotiating a post-Brexit trade agreement, the British economy, and in particular its manufacturing sector, is actually doing better than ever.

Globalists would like people to believe that an economy cannot succeed unless it enters into supranational organizations like the European Union or World Trade Organization. But that’s just not true. Economic growth depends on what it always has: making the right products better than the competition and selling them well.

The biggest boon the British economy received after the June 2016 Brexit referendum was a sharp fall in the value of sterling. The pound is now down some 10% from its pre-referendum level. (See Figure 1) The benefits of a lower exchange rate are that it gives a boost to exports, it makes domestic production more competitive against imports, and it encourages savings. A lower exchange rate also gives a boost to inflation, which is often not a good thing for an economy, and we’ll get to that in a moment.

Up to now, the British economy has suffered from what could be called the American Disease. Main features of this malady include:

One way to break through this vicious cycle is to cut the exchange rate and use the resulting competitive advantage to build up your export industries. This is exactly what is happening in Britain today. Theresa May’s divided Conservative government did not set out to achieve the lower exchange rate. It was thrust upon them by the financial markets, which perceived Brexit as a threat, partly because Brexit is indeed a threat to their own livelihoods as members of London’s highly-paid financial services industry.

In September, UK manufacturing output growth came in at double the level forecasted by economists. “Annual growth in export volumes was still a punchy 10 percent in September,” UK government statistician Kate Davies told the Financial Times on November 10th (sounding shockingly exuberant for a statistician). “And surveys suggest this strength should continue, while import growth should slow in line with weakening consumer spending growth,” she added.

But the news gets better. On a year-on-year basis, production of transport equipment (including automotive) was up 5.8%, production of other machinery and equipment was up 9.2%, and production of computer equipment was up 9.7%. These excellent growth rates point the way to the trend that the UK government should promote in the years ahead. In the auto industry, UK labor costs are highly competitive and the UK benefits from millions of investment dollars from Toyota, Nissan, Jaguar Land Rover, and many component and subsystem suppliers. In the computer industry, while Asia has taken over the vast bulk of worldwide computer manufacture in the last two decades, the tide may be turning. US technology buyers (including the US government) are rethinking the issue of technology manufacture, in light of recent revelations such as the danger that US military bases are guarded by Internet-enabled security cameras manufactured by a Chinese company. A move to favor products made by friendly nations may not be too far away.

The New York Times got its knickers in a twist over the fact that consumer spending is sagging, inflation is up to 3%, and the price of pineapples measured in pounds sterling has risen (I kid you not). The Times was reflecting the views of mainstream economists who believe that propping up consumer spending is the key to economic success and the key to the current government winning the next election. Economists have a habit of presenting their world-view or analytical framework as the uniquely correct world-view and then confusing non-economists by dispensing judgments without revealing their thought process and the prejudices they conceal.

I shall be very clear about the different world-views so readers can make their own judgments. Conventional UK economists generally favor policies aimed at getting unemployment down and consumer spending up in the short term. This is reasonable as the political cycle drives most government economic policymaking and if one is an economic advisor to the current government, one should advise them to do whatever maximizes their chances of reelection.

I am a growth economist and an industrial economist. In my view, the need to maintain employment and consumer spending has large costs in terms of medium-term and long-term growth. Since 1950, the UK has pursued short-termist consumption-focused economic policies (with the sole exception of 1979-1990 when “Iron Lady” Maggie Thatcher pursued a different set of policies). The result can be seen in Figure 2, where the UK has the lowest rate of fixed investment of any major economy, at 16.5% in Q2 2017. Investment is the main driver of future growth. 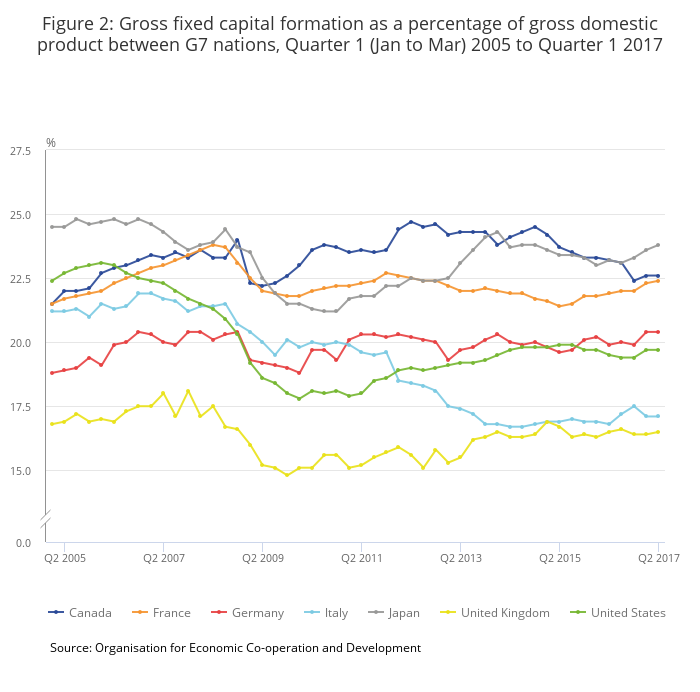 The map in Figure 3 (below) shows the results of 67 years of short-termist economic policies. While London and its suburbs are as affluent as anywhere in the EU, the Midlands, North of England, Scotland, and Wales are mired in relative poverty, equivalent to southern Italy. Germany has not only surpassed the UK in income per head, but has become the dominant power in the EU (which may one day become the German Economic Union). Germany has delivered these outstanding results by pursuing export-led growth-oriented economic policies: investment in high-value industries (mainly manufacturing), promoting export industries, restraining wage increases and consumer spending to free up resources for investment in industry, and ensuring a competitive exchange rate (indeed an excessively low rate under the current euro currency system). Export-led growth enables a nation to achieve world-class scale while generating resources for investment. As a result, all of western Germany shows up as affluent on Figure 3.

The UK has an unprecedented opportunity today to exploit the low sterling exchange rate and departure from the EU by implementing policies that promote manufacturing, reduce the weight of finance in the economy, increase investment, and restrain consumption expenditure, while explaining to voters that restraint today will lead to greater prosperity 5, 10, and 20 years from today. Even in the hand-wringing New York Times fret-fest, an alert reader can detect the positive impact of the fall in sterling. Two manufacturers, one of fruit-flavored snacks, and another in machinery, said they are currently seeking domestic alternatives to replace imported supplies.

According to EU data, after the 2016 devaluation of sterling, the UK now has unit labor costs some 15% lower than Germany’s and 20% lower than France’s. But industrial strategy must go further. Policies are needed to identify and encourage investment in industries where Britain can boost global market share.  A good indicator of what companies and industries to target may come from a stock market index created last year by accounting firm KPMG. The firm broke up Britain’s largest public companies into a “UK 50” and a “non-UK 50”. The UK 50 derive more than 70% of their revenue from the UK market while the non-UK 50 derives more than 70% of their revenue from outside the UK. Figure 4 shows the differing stock market performance. Many of the companies in the non-UK 50 fall into the industries cited above as delivering strong recent growth. Underlying this growth strategy is recognition of the fact that management, workers, and shareholders all do well if a company does well. That mentality is a sea change from Britain’s 200-year-old tradition of industrial class division and 1,000-year-old tradition of social class division.  Smaller countries (Norway and Sweden for example) each have class divisions, but public awareness that they are small countries competing for position in a much larger world have enabled the industrial harmony and cooperation that led to success. Both countries have much higher wages and living standards than the UK—or than the EU average. (In fact, in 2016, UK average unit labor costs at €26.7 ($31) are slightly below the EU average of €29.8 ($35).)

Where do the Brexit negotiations figure in all this? As Tennessee Williams warned us half a century ago, only a sick person in a mental institution would depend on the kindness of strangers. The UK government should enter these negotiations with a long-term industrial strategy for the economy, and not lose sight of its goals. The EU needs the UK more than the UK needs the EU. Last year, Britain ran a goods trade deficit with the EU of £96 billion ($125B). Its EU imports were 67% greater than its EU exports. EU nations have far more to lose from a collapse in their UK trade than does the UK.  Is it impossible to imagine London without champagne or BMWs? That is precisely the question they are asking themselves in Munich and Reims.

But it’s also important to remember that the EU is by far the most important market for UK goods and services. For UK industry to succeed, it has to measure itself, and compete against, the best in the world. Helped by the falling pound, British exports to the EU rose 7.5% in 2016, much faster than the growth rate of the EU economies. So the UK government should approach these negotiations in a robust manner, but without forgetting that the best guarantee of good trade relations is to make goods that customers want to buy. If the initial deal is not perfect, EU member nation businesses will get their governments to come back to the negotiating table in the future. Diplomacy follows economic reality, not the other way round.

I can hear my friends in London, such as my onetime mentor, colleague and great cynic, ex-Labour MP Brian Walden, protesting that there are very few MPs at Westminster who would endorse such an audacious growth strategy or be willing to face the electorate on such a self-denying “jam tomorrow” strategy. To which I can only reply by quoting the great Tory leader Winston Churchill: