Organic grain is flooding into the U.S., depressing prices and drawing complaints from domestic organic farmers who fear their harvests are held to stricter standards than foreign-raised crops.

Turkey, for instance, vaulted ahead to become by far the biggest supplier of organic corn and soybeans to the U.S. last year. The Mediterranean country in 2016 shipped to the U.S. 400,000 metric tons of organic corn, nearly quadrupling its prior-year total, while its soybean shipments climbed by more than eight times, U.S. Agriculture Department data show. Other key suppliers to U.S. organic-food companies are now Ukraine, Argentina, Romania and India.

The rising imports reflect how U.S. consumers’ appetite for organic products, which are produced without synthetic pesticides, genetically engineered seeds, and certain fertilizers, are challenging food companies to keep up. As U.S. meat and egg companies like Pilgrim’s Pride Corp., Perdue Farms Inc. and Cal-Maine Foods Inc. expand organic production, requirements for organic animal feed in greater quantities have prompted companies to seek corn and soybeans grown overseas. In the past year, a stronger U.S. dollar has also made foreign-produced crops cheaper.

U.S. organic-farming groups say that influx of foreign grain has been a chief factor in slashing prices for organic corn by about 30% in 2016, along with a 20% decline for organic soybeans. Those declines came despite robust growth in U.S. sales of organic foods—and far underperformed prices for nonorganic corn and soybeans. USDA-certified organic food sales in 2016 climbed 10% to $12.3 billion, versus a 0.7% increase in conventional grocery sales, according to Spins LLC. Those figures don’t include sales from Whole Foods Market Inc., a major organic retailer.

Some organic farmers in the U.S. contend that overseas organic farms benefit from looser oversight, giving them an edge over domestic farms. They point to past failures among foreign-based organic operations in following U.S. organic standards, and occasional cases of fraud. Now U.S. groups want U.S. authorities to step up scrutiny of organic operations in Turkey and other Eastern European countries, and provide more support for U.S. organic farmers.

“What we’re after is a fair shake,” said John Bobbe, executive director of the Organic Farmers’ Agency for Relationship Marketing Inc., a Minnesota-based organic-farming cooperative, which has filed complaints with the USDA over the matter. USDA officials say that all organic operations are held to the same standards, but the agency is investigating the complaints and discussing new requirements to tighten oversight. 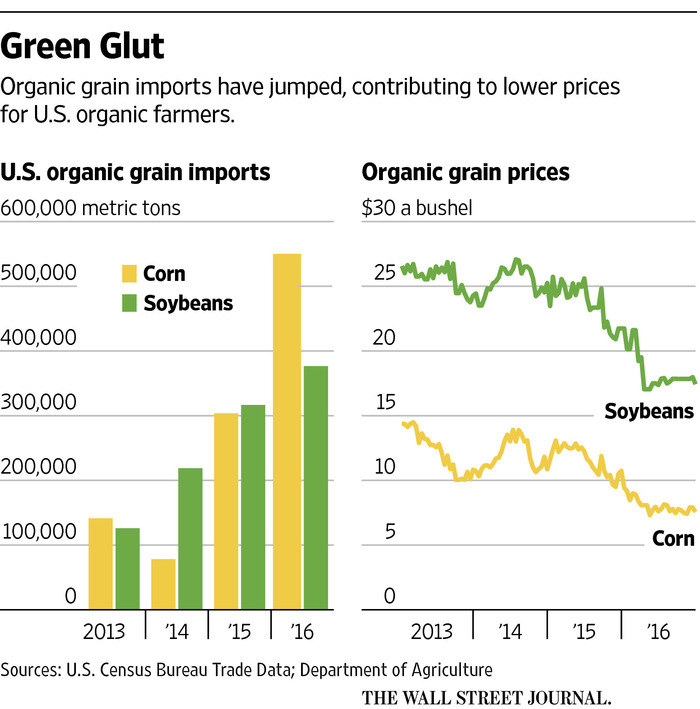 Nate Lewis, farm policy director for the Organic Trade Association, representing U.S. organic-food companies and farmers, said the group has “confidence in the USDA’s system.” Still it urged the U.S. Department of Agriculture last July to require all organic imports to include certificates that allow the crops to be traced back to the overseas farms where they were grown, beyond the firm that bought and transported the crops.

Miles McEvoy, deputy administrator in charge of the USDA’s organic program, said the agency plans to propose a rule that would require such certificates for all organic imports. With the rise of organic grain production in Eastern Europe, he said the USDA is stepping up scrutiny of the region, sending an auditor to Ukraine in the fall and a team to Turkey this winter.

Organic-farming groups say those moves are long overdue, pointing to previous reports of organic fraud in Eastern Europe. In January 2016, the USDA’s Foreign Agricultural Service noted reports of “fraud or unapproved production methods” in organic products shipped from Turkey, which were documented by European and U.S. groups in 2012, 2013 and 2015. “There have also been instances where a few Turkish companies were found to have been using fraudulent organic certificates,” USDA officials wrote.

Turkey’s Ministry of Agriculture didn’t respond to requests for comment.

Mr. McEvoy said the USDA is also considering a separate requirement for commodity traders dealing in organic crops to also have certification under the USDA program. Critics say the lack of such a requirement leaves a gap that could enable fraud or negligence.

Farming groups also want the USDA to do more to help domestic farmers go organic. They seek programs such as one introduced in January that helps farmers sell crops at a premium during the period that is required to transition from conventional agriculture to the USDA’s organic method.

Typically, farmers shifting to organic have to sell their crops at lower, conventional prices during that changeover period, which takes about three years. U.S. organic farmers say that competing against cheap imports has diminished the payoff from a tougher method of raising crops.

Michael Konen, who raises organic corn, soybeans and wheat on 150 acres near Sugar Grove, Ill., said that when he converted to organic farming eight years ago he was getting $11 to $16 per bushel more for his organic corn versus conventional varieties. Over the past two years, he said, that premium has shrunk to about $4 to $8, though his costs haven’t changed.

“Expansion’s definitely out of the question at this point,” said Mr. Konen.

Lynn Clarkson, president of Illinois-based Clarkson Grain Co., which deals in organic crops that are raised domestically and overseas, said that organic food’s reputation relies on strict enforcement of farming standards. “The biggest threat to organic is the loss of credibility,” he said.