US has real chance to bring manufacturing home from China

Editor's Note: A Londoner view on the Great Decoupling from China.

Growing disillusionment with China, heightened by misgivings over Beijing's initial handling of the coronavirus pandemic, presents the U.S. with the opportunity to launch a drive to bring manufacturing back home. The time is certainly ripe for a reshoring drive.

The changing cost equation in China is one reason. With productivity growth stalled and the urban migration of the rural populace slackening even before the pandemic, manufacturing profit margins are under pressure with factories having to pay higher wages to fill positions.

The steady rise in labor costs, compounded by the tariffs U.S. President Donald Trump has imposed on Chinese imports, has all but eroded the competitive advantage of such goods. In addition, a rise in the cost of capital in China is inevitable in the coming years because Beijing yet again needs to clean up a mountain of bad debt but this time that will have to take place in the context of much slower growth.

With export income drying up, using the banking system as an ATM will soon no longer be a viable option for the government. As a result, companies will find it harder to sustain the economies of scale which previously made China such a powerful export platform.

Another factor in reshoring's favor is the ongoing shift in the world economic and political order as the rules of engagement between the U.S. and China are rewritten.

The confrontation between the incumbent superpower and the challenger is epitomized by the geopolitical arm-wrestling over whether Chinese equipment supplier Huawei Technologies should be allowed a role in building the next generation of mobile phone networks in Western nations.

In the latest iteration of the Great Decoupling, the U.S. has revoked elements of Hong Kong's preferential trade status in response to China's imposition of draconian national security legislation in the former British colony. The many U.S. companies operating in Hong Kong will not be the only ones feeling cold winds blowing in from Beijing.

A third factor is the coronavirus pandemic, which has brought home to multinational companies and governments alike the need to reconsider the security and resilience of their supply chains, especially in vital industries like medical equipment and pharmaceuticals.

All told, China has grabbed 30% of global manufacturing value-added since its accession to the World Trade Organization in 2001 gave it unfettered access to international markets. But its sheer size means China cannot keep expanding its huge market share. Other countries will not put up with further wholesale deindustrialization of their economies.

Indeed, with unease mounting in the West over the economic and social repercussions of globalization, China's function in the world economy is at a tipping point and policymakers around the world are concluding that they should never have become so reliant on it.

The U.S. is best positioned, based on Enodo Economics' analysis of costs and other factors, to draw back producers of electrical machinery and equipment, wood processing and chemicals, rubber and plastics, rail and ship manufacturing and pharmaceuticals. 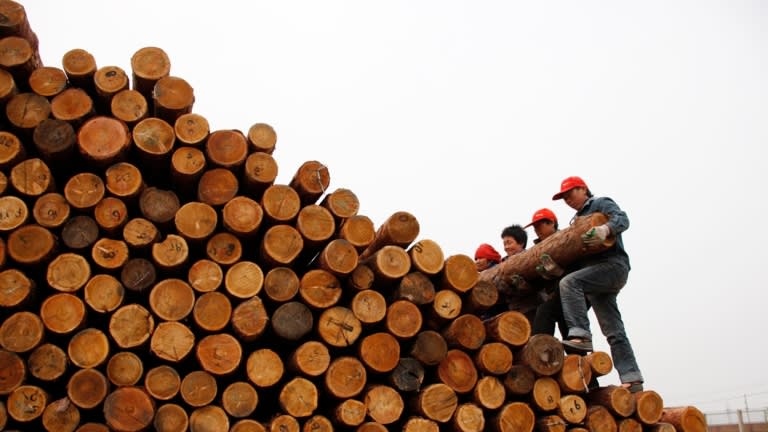 Workers deliver lumber at a wooden furniture factory in Huaibei, China: the U.S. is positioned to draw wood processing and certain other industries back to its shores.    © AP

But China's vulnerabilities will not be sufficient by themselves to trigger a wave of reshoring. The U.S. also needs to build on its superior productivity by making automation more cost-effective. As well as evermore powerful computers, that means more research and development in sectors including artificial intelligence, optical sensing and voice recognition.

Investing in equipment and training workers to use the new machines will be critical to increased competitiveness. Without a skilled workforce, the Manufacturing Institute, a Washington-based research and advocacy group, expects 2.4 million industrial jobs in the U.S. could go unfilled by 2028.

The U.S. needs to help level a playing field tilted in China's favor by subsidies, especially in high technology sectors. One early success is Taiwan Semiconductor Manufacturing Co.'s pledge to build a $13 billion chip factory in the state of Arizona.

Washington is trying to build a global coalition of like-minded democracies to thwart Huawei's expansion of fifth-generation, or 5G, wireless networks on security grounds. The envisaged "Economic Prosperity Network" of companies and civil society groups would share standards on everything from digital business to energy and infrastructure. The explicit aim of the initiative is to remove global industrial supply chains from China.

The stars, then, are lining up for some U.S. manufacturers to head home. After accounting for productivity, China no longer wins hands down on costs. Profits are under pressure and a wrenching economic rebalancing lies ahead that will dim China's attractiveness as a platform for exporting to the global market.

The U.S. needs to capitalize on the opening offered by COVID-19 to extend its productivity lead over China by ramping up capital investment, raising the skills of its workforce and harnessing the resources of its world-beating research universities. This gives Washington a chance to really make America great again.