China’s industrial sector has lost 5 million jobs in the last year, including 1.8 to 1.9 million jobs because of the trade war with the United States, a leading Chinese investment bank estimated on Wednesday.

The decline in employment from July 2018 to May 2019 was not only due to the effects of the trade war, but also to domestic structural adjustments and cyclical factors, the analysis showed.

The report gives a more downbeat picture of the nation’s labour market than the government’s narrative, which terms the job marketplace “stable overall”.

Other researchers and economists from the Bank of Communications and Haitong Securities estimated that the trade war has so far cost China between 700,000 and 1.2 million jobs.

CICC’s research did not factor in the effect of tariff increases of 10 to 25 per cent on US$200 billion of Chinese imports, which came into force in May.

That omission suggests the extent of the job losses is even larger and will continue to grow as the increased levies make their way through the Chinese economy.

The Politburo,
China’s 25-member top leadership group headed by President Xi Jinping, is expected to hold its quarterly meeting on the economy before the end of the month and may propose new policies to shore up growth and employment.
Ensuring sufficient job growth is the government’s top priority as the trade war drags on into its second year. However, some economists expect the Politburo to wait until later this year to enact new fiscal and monetary stimulus if another decline in the growth rate follows the slowdown to a record low of
6.2 per cent in the second quarter of 2019. 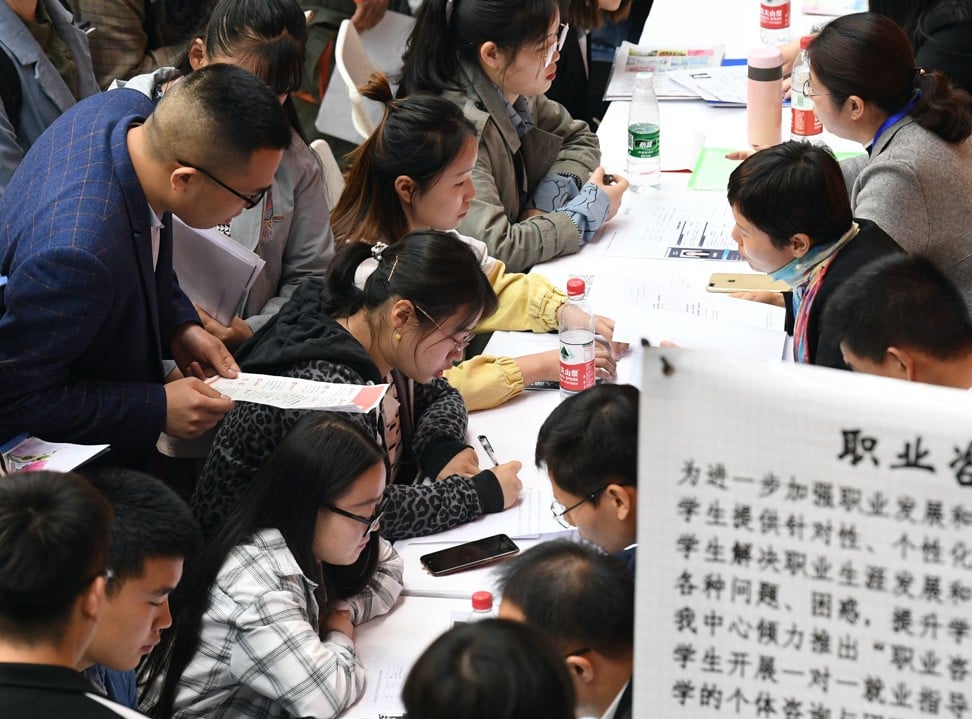 The research did not factor in the effect of the US tariff increases on US$200 billion of Chinese imports from 10 per cent to 25 per cent, which came into force in May. Photo: Xinhua
Share:

China has not published official data on job losses resulting from the trade war, but has estimated the dispute would reduce national gross domestic product by 0.5 per cent, at most.

The surveyed urban unemployment rate remained steady at 5.1 per cent in June, compared with 4.8 per cent a year earlier. However, the figure does not include millions of migrant workers, whose low-paid manufacturing jobs are most affected by US tariffs.

The economy created
7.4 million new urban jobs
in the first half of 2019, or about two thirds of the government’s annual target of 11 million, according to the National Bureau of Statistics.
If China-US trade friction escalates, manufacturing jobs will be subject to bigger challenges. The government should enact stronger countercyclical adjustments and structural reforms to achieve the stabilisation of employmentChina International Capital Corp

CICC’s research showed that in the eight manufacturing subsectors most directly exposed to the Trump administration’s tariff increases, at least 1.5 million workers lost their jobs.

The computer and telecommunication equipment sector has been hit hardest, with employment dropping 4.9 per cent amid heightened US scrutiny of Chinese technology firms, including telecommunications giants ZTE and Huawei.

A number of multinational companies also have closed some or all of their factories in China because of rising operating costs and the effect of US tariffs. Sony Mobile shut down its Beijing factory in March, while South Korean phone maker Samsung is expected to close its Huizhou plant before September.

Employment in the rubber and plastics subsector fell by 3.8 per cent, electrical and machinery 2.8 per cent and metals 2.6 per cent, CICC said.

The investment bank said the employment market took its biggest jolt after the first two batches of US tariffs hit last July and August, affecting a combined US$50 billion of Chinese imports.

“If China-US trade friction escalates, manufacturing jobs will be subject to bigger challenges,” CICC’s report said. “The government should enact stronger countercyclical adjustments and structural reforms to achieve the stabilisation of employment.”

What can we expect from China’s top Politburo leadership meeting?

Specifically, CICC recommended “bigger policy support for labour-intensive industries, such as the consumption-driven services sector and the investment-driven construction sector, including further tax cuts and a lowering of financing costs”.

Employment is one of six crucial areas in which the Chinese government vowed in July 2018 to maintain stability.

In May, soon after Washington announced the tariff increase on US$200 billion of Chinese goods, Beijing set up a special interministerial coordination group to oversee the impact from job cuts, particularly large-scale lay-offs of migrant workers, whose unemployment far from home was particularly destabilising.

Liu Xuezhi, a senior researcher with the Bank of Communications, estimated that the trade war was directly responsible for 700,000 jobs cuts so far. Including domestic upstream and downstream industrial sectors, the figure is above 1 million, he said.

However, “this doesn’t mean that national unemployment will rise,” Liu said.

“If you look at the intensified efforts by government [to stabilise growth and employment], the trade war [job] losses can be offset so that the job market will remain relatively stable.”

Jiang Chao, Haitong Securities’ chief economist, estimated the trade war had resulted in 1.2 million Chinese job losses so far. But the figure showed the impact on employment from the trade war has been “limited,” since the losses represented just a few tenths of one per cent of China’s overall workforce.

“There will be some structural pressures … some lost job positions, such as in overcapacity ridden non-ferrous metal and steel mills,” he said.

“Labour intensive parts of the supply chain [also] will not come back. Given the age and knowledge of those who have been laid-off, it will be hard for them to shift to the hi-tech or service sectors,” the economist said.