What Trump’s Huawei Reversal Means for the Future of 5G

Editors note: This is what you get when you listen to people who think that a service economy is the wave of the future.

Huawei is the top threat to American dominance in wireless technology. And the U.S. is woefully, even disgracefully, behind.

In an impromptu question-and-answer session late last month at the White House, President Trump was asked about the nation’s efforts to block Huawei, the Chinese telecommunications company, from doing business in the United States and with our allies around the globe.

“Huawei is something that is very dangerous,” Mr. Trump said. Then, almost in the same breath, he added: “It’s possible that Huawei would be included in a trade deal. If we made a deal, I can imagine Huawei being included in some form or some part of a trade deal.”

Over the weekend in Japan, Mr. Trump appeared to choose trade over national security, suspending the ban on United States companies’ supplying equipment to Huawei as he hopes to reach a trade deal with President Xi Jinping of China. Without providing any details, he declared that American companies could sell to Huawei without creating a “great, national emergency problem.”

He said this even as own secretary of state, Mike Pompeo, spent the past several months traveling the world warning our allies that Huawei is a profoundly dangerous security threat and instructing them to freeze out the company.

Senator Marco Rubio, Republican of Florida, used Twitter to call Mr. Trump’s reversal “a catastrophic mistake” that “will destroy the credibility of his administration’s warnings about the threat posed by the company, no one will ever again take them seriously.” (Mr. Trump followed the same playbook with ZTE earlier this year, banning it and then reversing the ban to placate the Chinese.)

While Mr. Trump may view Huawei as both “dangerous” and a pawn in the trade war, the truth is it may be something else entirely.

Huawei is the most significant long-term competitive threat to the United States’ dominance of the future of wireless technology. And the United States is woefully — even disgracefully — behind.

No matter what the United States does to hobble Huawei — and Mr. Trump’s latest stance will only hasten its rise — it will not alter a fundamental problem that clouds the conversation: The United States needs a meaningful strategy to lead the world in next-generation wireless technology — a kind of Manhattan Project for the future of connectivity.

Don’t take my word for it.

In April, amid the frenzy over the report from Robert S. Mueller III, the special counsel investigating Russian election interference, another alarming government report was issued — and largely overlooked.

It was written by the Defense Innovation Board, a group of business leaders and academics that advises the Defense Department. And it was a scathing indictment of the country’s 5G efforts.

“The leader of 5G stands to gain hundreds of billions of dollars in revenue over the next decade, with widespread job creation across the wireless technology sector,” wrote the board, a who’s-who of the tech world that includes the former Alphabet chairman Eric Schmidt, the LinkedIn founder Reid Hoffman and Walter Isaacson, the author and a former chief executive of the Aspen Institute.

“The country that owns 5G will own many of these innovations and set the standards for the rest of the world,” the board wrote.

It added in no uncertain terms: “That country is currently not likely to be the United States.”

It is no wonder. No American company makes the devices that transmit high-speed wireless signals. Huawei is the clear the leader in the field; the Swedish company Ericsson is a distant second; and the Finnish company Nokia is third.

It is almost surprising that the Defense Department allowed the report to be published at all, given the board’s remarkably blunt assessment of the nation’s lack of innovation and what it said was one of the biggest impediments to rolling out 5G in the United States: the Pentagon itself.

The board said the broadband spectrum needed to create a successful network was reserved not for commercial purposes but for the military.

To work best, 5G needs what’s called low-band spectrum, because it allows signals to travel farther than high-band spectrum. The farther the signal can travel, the less infrastructure has to be deployed.

In China and even in Europe, governments have reserved low-band spectrum for 5G, making it efficient and less costly to blanket their countries with high-speed wireless connectivity. In the United States, the low-band spectrum is reserved for the military.

A London sign advertising 5G, which works best using a part of the wireless spectrum that in the United States is reserved for the military.CreditSuzie Howell for The New York Times 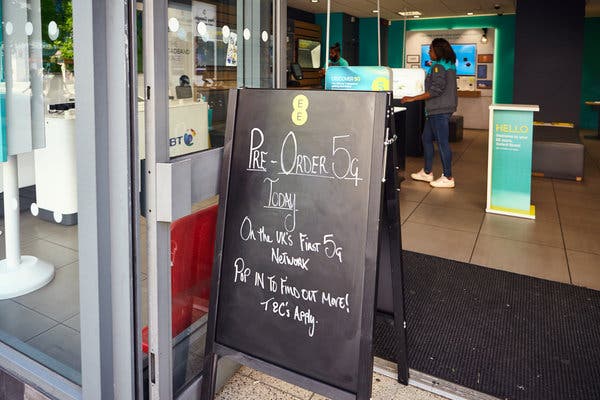 In other words, the spectrum that has been allotted in the United States for commercial 5G communications makes 5G significantly slower and more expensive to roll out than just about anywhere else.

That is a commercial disincentive and puts the United States at a distinct disadvantage.

The spectrum challenge creates a negative feedback loop for manufacturers, which may help explain why no major American technology company has jumped into the fray. But since President Trump issued an executive order that banned the purchase of equipment from companies posing a national security threat — which include Huawei — it threatens the ability of American companies to expand their 5G networks, particularly in rural areas.

United States phone companies like AT&T and Verizon may end up seeking to manufacture their own transmitters given the dearth of options.

Not winning the 5G contest comes with consequences. “If China leads the field in 5G infrastructure and systems, then the future 5G ecosystem will likely have Chinese components embedded throughout,” the Defense Innovation Board wrote. “This would pose a serious threat to the security of D.O.D. operations and networks going forward."

One of the board’s recommendations is that the Defense Department share its low-band spectrum to accelerate the commercial development of the technology in the United States.

While sharing spectrum comes with its own security challenges, the board raised the prospect of some unique, surprising benefits: “Integration of government and civil use may provide a layer of security by allowing military traffic to ‘hide in plain sight’ as traffic becomes more difficult to see and isolate. Similarly, adversaries might be deterred from jamming this spectrum because they might be operating on the same bands.”

None of this is meant to suggest that Huawei does not represent a national security threat if the Chinese government were to use it to spy on foreign adversaries in the future. (Though, it is worth saying, there is no evidence presented publicly by any American agency that the company’s hardware has been used that way — yet.)

Nor should it be read as an apology for Huawei’s record of stealing intellectual property, which has been well chronicled.

Sharing spectrum should be only the start, however. Policymakers must grasp that the “market” in the United States isn’t working the way it should, especially when state actors like China are supporting companies like Huawei.

If the United States is going to lead the world, Washington needs to think hard about the incentives it provides companies — not only for research and development, where we are still leading, but also for manufacturing the technology that is in our national interest to control as well as what mergers it allows.

One morning in late February, Mr. Trump typed out a message on Twitter: “I want the United States to win through competition, not by blocking out currently more advanced technologies.”

That is a worthy goal, and an achievable one. But it requires more than the Band-Aid solution that is a trade deal or a blacklist. It requires a new strategy.

Maybe we’ll have one in time for 6G.